MANILA, Philippines — In terms of ships deployed at sea, China's navy has overtaken the United States, making it the world's largest, according to a report.

Andrew Erickson, a professor at the China Maritime Studies Institute at the US Naval War College, wrote that China fielded more battle force ships than the US Navy sometime between 2015 and 2020.

In an article titled "The Chinese Naval Shipbuilding Bookshelf", Erickson noted that with around 360 ships, China's navy exceeds its American counterpart by more than 60 warships.

In addition to this, China's coast guard and maritime militia bring the total of the Chinese sea forces to over 700 ships.

Erickson attributed the buildup on Beijing's sea power to its commercial shipbuilding industry, which subsidizes and supports military shipbuilding efforts. 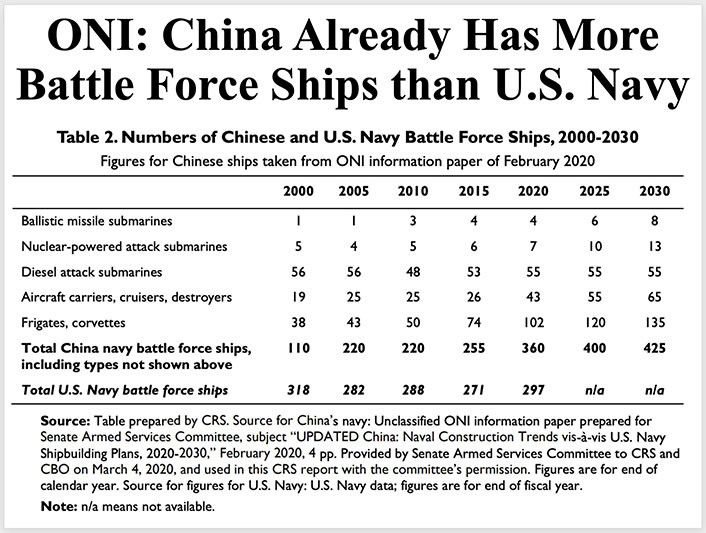 China's shipbuilding reflects its efforts to "coercively envelop Taiwan, resolve other sovereignty disputes in its favor, carve out the region as zone of exceptionalism to international rules and norms, and project Beijing’s power and influence around the world."

According to the report, for each surface combatant that the US produces, China makes two to three warships.

If this continues, China would be able to deploy a fleet with a larger quantity and "qualitatively on par" with the US Navy by 2030, Erickson said.

Despite the growing number of Chinese warships, the US Navy remains the strongest in the world in terms of capabilities.

"While the capability gap is narrowing rapidly in some warfare areas, for example, Chinese navy and coast guard ships lag behind their American counterparts in overall individual capabilities," Erickson told Philstar.com in an online exchange.

The strategy professor noted that China's coast guard (CCG) lags behind its American and Japanese counterparts when it comes to air assets.

"With only fifty-plus helicopter-capable ships, and far fewer helicopters and fixed-wing aircraft, the CCG lags far behind in aviation—although it will likely acquire additional maritime patrol aircraft and helicopters to remedy this," Erickson said.

China's navy, on the other hand, leads the world in terms of naval ballistic missilery, which the US has just started to explore.

Near and far seas

Erickson's report also noted that the Chinese People's Liberation Army Navy has transitioned from "near-coast defense" to a combination of "near-seas defense" and "far seas protection."

China's three sea forces — navy, coast guard and maritime militia — are all focused on the contested "near seas" (the Yellow, East and South China Seas). This is in contrast to the US Coast Guard focused near American waters and the US Navy dispersed around the world.

Foreign Affairs Secretary Teodoro Locsin Jr. fired a diplomatic protest against the China Coast Guard Law, which he described as a "verbal threat of war" as the law would also cover the West Philippine Sea, the part of the South China Sea within the country's exclusive economic zone.

In response to Locsin's protest, the Chinese Embassy in Manila insisted that the new law does not specifically target any country and that it is not a threat of war.

"The enact of the law doesn’t indicate any change of China’s maritime policy. China has always been committed to managing differences with countries including the Philippines through dialogue and consultations and upholding peace and stability in the South China Sea," the Chinese Embassy said in a statement earlier this month.

One in four people will have hearing problems by 2050—WHO