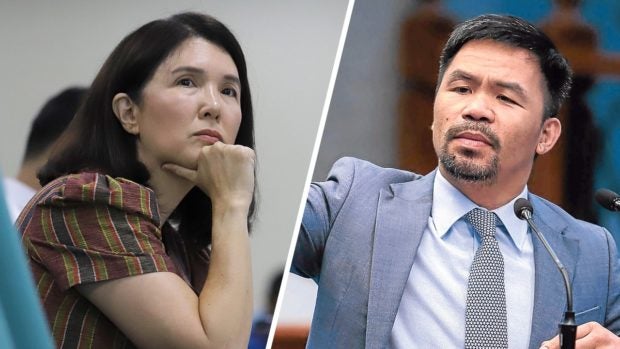 MANILA, Philippines — The Senate on Monday approved on third and final reading a bill establishing the Philippine Boxing and Combat Sports Commission, a measure which prompted lengthy debates on the floor due to funding concerns.

The measure was authored and sponsored by boxing-champ-turned-politician Senator Manny Pacquiao.

During plenary deliberation on the measure, Pacquiao was quizzed by Senator Pia Cayetano, who questioned the need for the said commission when the Games and Amusements Board (GAB) is already existing, saying putting up a separate body for one type of sport may be a duplication of functions.

She also raised concern over the need for a P150-million initial .

In the end, Cayetano suggested an amendment to the bill that would allow the commission to accept donations from the private sector for the professional boxers and combatants’ welfare development trust fund.

Under the bill, the commission will be an attached agency of the GAB for policy and program coordination.

The boxing commission shall be composed of the GAB chairperson as the head and four members from the Department of Health as well as representatives from the professional boxing and combat sports industry, according to the bill.

Pacquiao said the passage of the measure has long been overdue and stressed the need to ensure the safety and protection of boxers and combat sports athletes.

“Time has come for boxing and combat sports to have a separate commission, to give it stability and a clear sense of direction,” he said.

The bill mandates all professional boxers and combat sports athletes to be covered by the Social Security System (SSS), Philippine Health Insurance Corporation (PhilHealth), and the Home  Development Mutual Fund (HDMF) or PAG-IBIG and shall be entitled to all the benefits in accordance with the law.

In ensuring the safety and health of the fighters, the bill also requires physical, medical and neurologic examinations to certify that the professional boxer or combatant is physically fit and safe to compete and should have emergency medical services in all professional boxing and combat sports match.

The measure also provides a mandatory rest period or an interval after which professional boxers and combatants can already compete in boxing contests and combat sports matches.

Further, the bill provides alternative livelihood programs for retired and/or injured professional boxers and combatants and the establishment of a trust fund to help enhance and uplift the social and economic opportunities and conditions of present and former sports fighters.