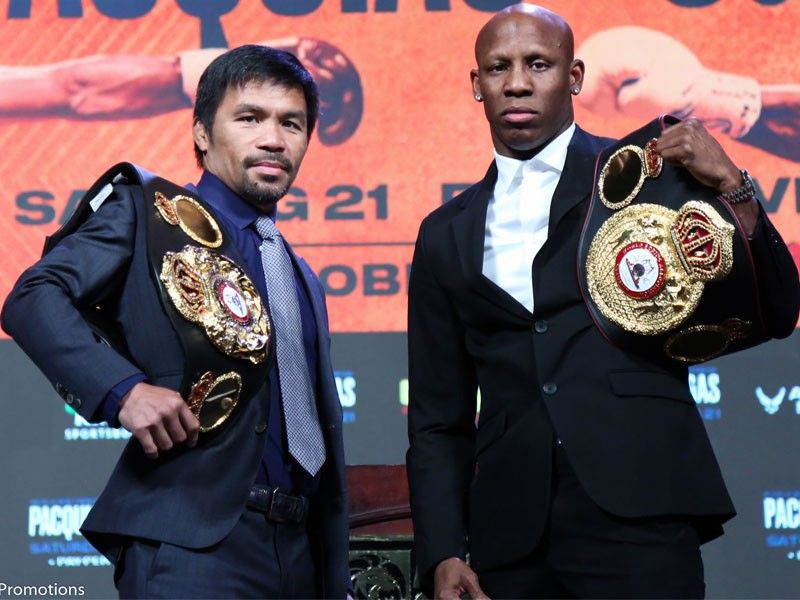 Both fighters successfully made weight at the MGM Grand Garden Arena in Las Vegas Friday (Saturday in Manila), one day after their tussle also at the same venue.

Ugas, the reigning titlist from Cuba, was first to tip the scales, making it at exactly the welterweight limit of 147 pounds.

The 35-year-old former Olympic bronze medalist is confident ahead of his title defense.

“I respect Manny Pacquiao, he's a legend. But all respect is finished once we get on the ring tomorrow,” said Ugas.

Pacquiao, meanwhile, weighed in one pound before the limit — something the Filipino icon had been doing in his past fights having zero issues with weight and in an effort to maintain his advantage in speed.

"I'm not taking this fight lightly. Tomorrow night we're going to have the victory," said Pacquiao, who will try to reclaim the title that was taken from him due to a two-year-inactivity.

The 42-year-old boxing star stressed that he had the best training in a long time, comparing it to when he prepared for one of his biggest upset wins — 18 years ago.

"I am ready for the fight.  I have had the best training.  It reminds me of the training camp I had when I was preparing for the first fight against (Marco Antonio) Barrera (in 2003),” Pacquiao said.

“The fans should expect to see the classic Manny.  If this is my last fight, and I do not know if it is, I want to give the fans a great fight with lots of action and that world title belt around my waist again. This fight means everything to me."