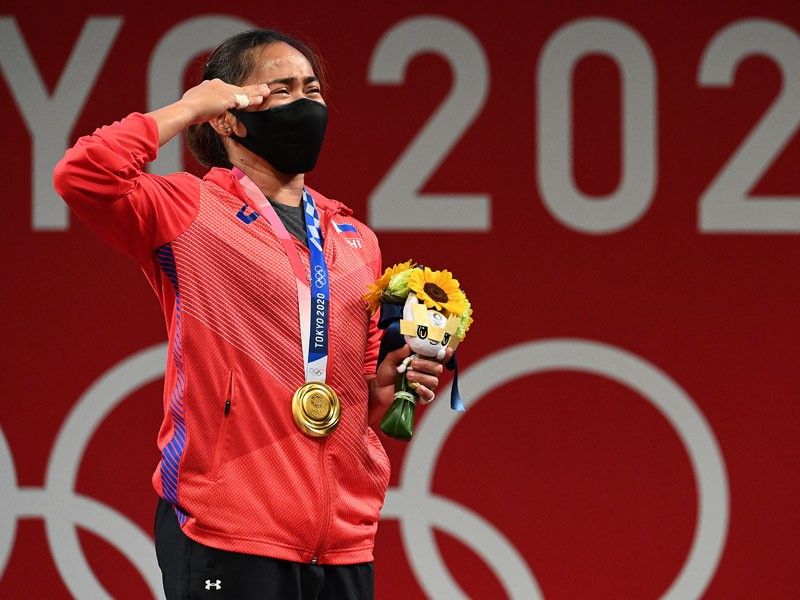 MANILA, Phillippines (Updated 9:15 p.m.) — The drought is over: The Philippines finally has struck gold in the Olympics.

Weightlifter Hidilyn Diaz, in her fourth and probably last Olympics, ruled the Women's 55kg event, setting an Olympic record of 224kg in total.

World Champion Quiyun Liao of China fell just a kilogram short of the Filipina with 223kg.

It took an Olympic record of 127kg in Clean and Jerk for Diaz to overtake Liao as the two had been swapping positions in the first and second place all evening.

Liao ramped up her third attempt at the clean and jerk to 126kg to try and overtake Diaz, but the ball was in the Diaz's court as she had another shot and made good on her attempt.

Diaz and Liao entered the clean and jerk at second and third, respectively, after Uzbekistan's Muattar Nabieva lifted an Olympic record 98kg to lead the pack.

But Nabieva faltered in clean and Jerk and only registered 114kg to end up outside the podium with 212kg.

Kazakhstan's Zulfiya Chinshanlo made up for lost ground in snatch where she just finished with 90kg with a 123 lift in clean and jerk. She took the bronze medal with a total of 213kg.