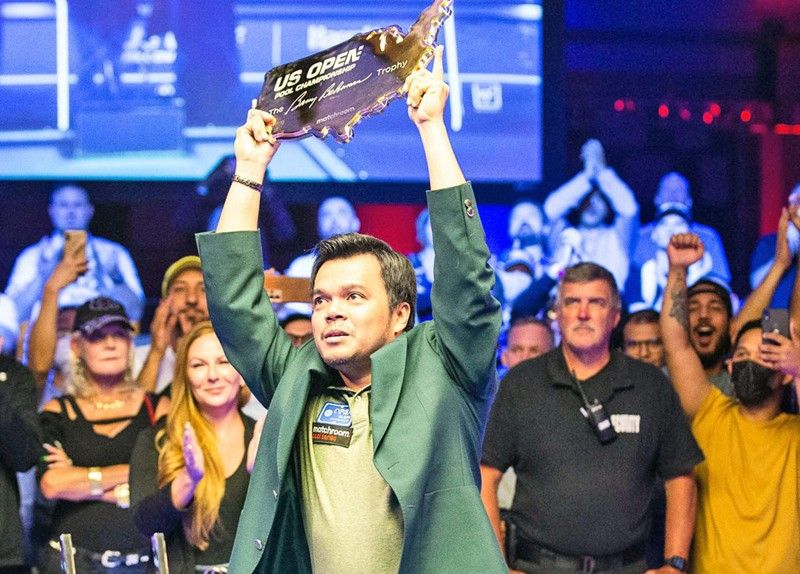 MANILA, Philippines — Carlo Biado put the Philippines back in the billiards map as he pulled off an Efren “Bata” Reyes-like feat with his dramatic come-from-behind triumph in the prestigious US Open Pool Championship yesterday in Atlantic City, New Jersey.

Biado, a former World 9-Ball kingpin, stamped his class on Singaporean Aloysius Yapp, 13-8, in a gutsy finals performance that saw him string up 10 consecutive racks to wipe out a five-rack deficit and seal his ascent to the throne.

“This is the best time of my life,” said Biado, wiping tears off his face to chants of “Car-lo!, Car-lo!” by an appreciative crowd at Hannah’s Resort.

“I’m happy because this event is one of my dreams,” said Biado, who came all the way from the losers’ bracket to win the trophy and the symbolic green jacket.

Yapp, who foiled a dream all-Filipino finale by beating Dennis Orcollo in the semifinals, 11-6, threatened to blow Biado away when he seized an 8-3 lead.

But a costly miss on the 9 ball in the 12th rack gave the Pinoy star a golden opportunity. Biado ran out the next two racks then went on an unstoppable tear. After knocking down the final ball, the player nicknamed “Black Tiger” jumped onto the table and raised his arms in victory amid applause.

Malacañang lauded Biado for his victory, calling him a “world-class billiards champion.”

“We congratulate Carlo Biado for bringing pride and honor to the country by winning the US Open Pool Championship,” presidential spokesman Harry Roque said in a statement.

Orcollo, who had won all of his matches before the semis setback to Yapp, earned $12,000 (over P600,000) for finishing tied for third with Japanese Naoyuki Oi, who yielded to Biado, 9-11. — Alexis Romero