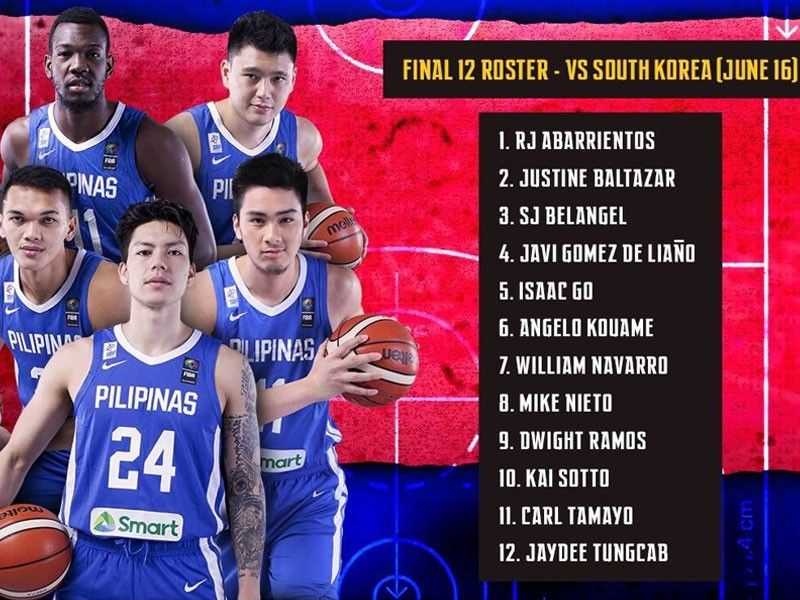 MANILA, Philippines – The roster for the Philippine men’s basketball team against South Korea in the FIBA Asia Cup qualifiers is a tantalizing one.

It is long on youth with an average age of 22 — the youngest in Group A. As far as experience goes on the senior national level, this will be a first for many of them.

However, this team has talent. They can play opposing teams half-court or they can run. They are long and athletic. Everyone on this team can shoot from the outside. And this team can pass the rock.

This would be a good match-up because Korean teams have been traditionally built the same way, minus the raw athleticism.

Much has also been made about the pairing of Angelo Kouame and Kai Sotto. Both are really tall, quick, and have inside and outside game. They can put the ball on the floor.

At times, look for head coach Tab Baldwin to possibly put out an all-Ateneo five on the floor because of their familiarity with one another as well as the system they run.

In the meantime, here are five things we are looking out for in Gilas’ campaign.

1. Will this team of young stars work?

Remember that young team of Rajko Toroman that kicked off the Gilas program? After a while, they could not make any headway because as the basketball cognoscenti would say, “minamama sila.” Hence, you needed the big boys in the PBA.

And the pros did well as we witnessed in the 2013 FIBA Asia Cup, which saw the ascent of the program. As always, there are conflicts with schedules and availability, and the decision returns to the young side to represent the country.

It goes back to the argument of fielding young teams via age groups that move up with every level. That formula has worked with Serbia, Croatia, Spain and many other countries.

Further, this is going to be interesting to follow from head coach Baldwin’s position. He’s worked with young teams he brought up and worked with a mish-mash of best players.

For one, Baldwin will adapt. But as we have seen with his work with Ateneo, he seems to work best when he has his system in place with young and coachable players.

So that will bear watching.

2. Can Dwight Ramos take it to the next level?

We know Dwight Ramos can score. From the first time local cage fans saw him with Ateneo in the PCCL to his recent Gilas stint, he is getting better. As his confidence grows, we like to look to him to take those big shots.

He can be the man on this team.

3. Can Kouame be that long-term solution for Gilas’ man in the middle?

Well, now he doesn’t need to do it alone. He has Kai Sotto, Justine Baltazar and Carl Tamayo play alongside.

Nevertheless, what he brings to the table will inevitably be compared to what Andray Blatche gave this team.

What helps Kouame is he resides here and he is familiar with many of his teammates. He still lacks experience, but that’s the cool thing — he is young, learning and getting better. If he does well here, who knows who is going to come calling when he decides to turn pro.

4. How much better is Sotto now?

The kid has a tremendous upside. People will be watching.

Sotto has had this time off to work on his game. It would be interesting to see if he has gained speed and more tricks in and around the blocks.

Baldwin has tempered expectations for Sotto, but we know this kid likes challenges. And we think he will do well.

5. How do the other stars respond to their roles?

I love the inclusion of Javi Gomez de Liano and RJ Abarrientos. They are both super talented and team players.

Javi has become so much a better play in the last couple of years. He has learned to pick his spots and not force the issue. That is why he has become a better player. In a team of selfless players, he is valuable.

RJ’s game reminds me of a young Dylan Ababou. We know he can take over a game if he wishes too. But what we’d like to see is his all-around game shine. He could be that glue guy who does a lot and could play three positions.

How SJ Belangel runs the point guard position is crucial. His star is going up. He does well here… wow.