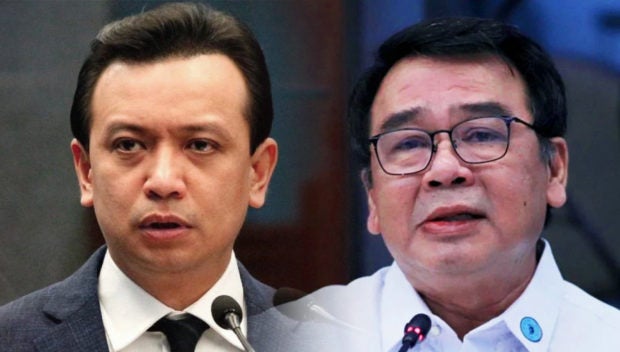 MANILA, Philippines — Former Senator Antonio Trillanes IV on Monday made known his reservations against the inclusion of former Bayan Muna Rep. Neri Colmenares in the senatorial slate of Vice President Leni Robredo, citing the Makabayan bloc’s supposed history of deceit in the past.

Trillanes, who is seeking a return to the Senate also under Robredo’s slate, made a lengthy post on social media about the Magdalo party’s stand on different issues, including the non-inclusion of Colmenares in the line-up.

He claimed that historically, Makabayan was not concerned about what was best for the country, and that activists within the progressive organization were only looking after their own interests.

Trillanes, whose Magdalo group composed of retired military officers had been at odds with the leftist organization, cited an experience in the 2016 campaign wherein Colmenares was part of the ticket of then presidential candidate, Sen. Grade Poe, but the latter’s colleagues were supporting another candidate, then Davao City Mayor Rodrigo Duterte.

He further said that Makabayan had also fought former President Benigno Aquino III, and had joined Duterte when it suited them.

Colmenares’ non-inclusion from Robredo’s slate, despite the latter’s efforts to unite the opposition, was a hot topic throughout the weekend as netizens debated on whether the former lawmaker should be part of it.

In a statement, Colmenares said that he understood Robredo’s decision as it might be what is needed at this time for her candidacy.

claimed that “we never got the chance to hear the objections to Neri’s inclusion nor were we given a chance to respond.”

“We can only speculate that there are objections coming from some of her supporters representing big business interests, militarists or even politicians who are at odds with Makabayan over various issues,” the coalition said.

While Colmenares has maintained that he sided with Poe throughout the campaign, there were several activist groups who pushed for , considering the human rights lawyer’s relations with the left and even the Communist Party of the Philippines.

Several also under Duterte’s administration, but they eventually left their posts in protest of the drug war and other issues like former president Ferdinand Marcos’ burial before the Libingan ng mga Bayani, and an anti-left stance by Duterte’s government.

But aside from being initially allied with Duterte, Trillanes also pointed out that the five 1Sambayan coalition conveners from Makabayan did not vote for Robredo, and instead showed inclination to another presidential candidate, Manila Mayor Isko Moreno.

According to Trillanes, he was also consulted before Senator Richard Gordon and former vice president Jejomar Binay was picked for Robredo’s Senate slate — to which he expressed reservations.

Both Gordon and Binay have figured in a spat with Trillanes in the past, but the latter said that he let the selection committee decide on the issue.

Last Friday, Robredo announced her Senate slate which featured eleven names.  As a last spot was still left open, the Vice President admitted that Colmenares is one of the personalities being considered.

Just days before that, and other sources confirmed that he and labor leader Sonny Matula are currently in talks with Robredo’s camp about a possible inclusion to her Senate slate.