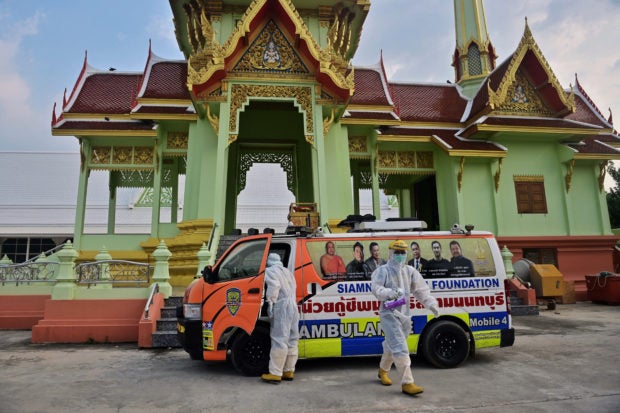 NONTHABURI, Thailand — Rescue workers dressed in protection gear hoist a gleaming coffin to a temple’s crematorium — a fast-tracked process that is a departure from Thailand’s tradition of days-long funerals as the kingdom grapples with a Covid-19 outbreak.

The Thai capital Bangkok has been the epicenter of the country’s third wave, with authorities struggling to contain the outbreak since it was first detected in a nightlife district in early April.

The number of cases identified in a single month surpassed Thailand’s total figure in early April — jumping from some 29,000 to 74,900 on Wednesday.

For families who have lost loved ones to the disease but are unable to afford a funeral, a volunteer association, Siam-Nonthaburi Foundation, has stepped in to help — offering free cremation services in coordination with Wat Rat Prakong Tham, a Buddhist temple in Nonthaburi, a suburb of Bangkok.

But due to the risk of handling the bodies, the service must be done quickly — and with plenty of safety precautions, said Pairat Soottoop, an official with the foundation.

“This is a risky job, a very difficult job,” he said, adding that they typically cremate a single body each day, but this third wave has meant they are handling four funerals daily.

On Wednesday afternoon, volunteer rescue workers dressed in full PPE gear carried a gleaming gold-and-white coffin out of the ambulance, immediately transferring it to the temple’s crematorium entry point.

Buddhist Thai funeral rites can last several days, with family members able to place flowers on the body before it is moved into the flames.

But with a disease like Covid-19, everything has changed — a daughter’s final words to her 59-year-old mother on Wednesday are brief, saying a farewell as she placed some robes on the altar.

Immediately after, she is required to exit the crematorium area — to where the rest of her relatives wait. The rescue workers then douse her offerings with disinfectant.

As monks chant, the doors to the crematorium close. Moments later, smoke wafts out of the structure’s roof.

Having seen so many of these fast-tracked funerals in the last month, Pairat’s only words of advice is for those with older family members to take the utmost precautions.

“Most of the dead who are brought here are elderly,” he told AFP.

Officials say the third wave’s rapid spread is due to the British variant of the virus, which was first detected last month.

On Wednesday, authorities said they have recorded its first case of the Brazil variant in state quarantine — which can reinfect people who have had the original strain.