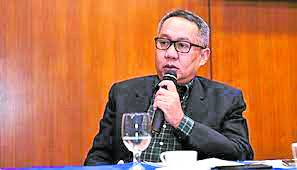 Telco industry executives downplayed the approval of a bill allowing greater foreign participation and investment in their companies even as their stocks rallied hard on Thursday.

Senators on Wednesday approved on final reading Senate Bill No. 2094 that amends the Public Service Act to reclassify entities such as telecommunications and transport firms into public services, thus allowing full foreign ownership.

Previously, the companies were capped by the 40-percent foreign ownership limit under the 1987 Constitution.

“There is no desire to increase foreign equity in PLDT at present, so in that sense, PLDT is neutral on this issue,” he said on Thursday.

Panlilio said the company was also “closely watching the development and the opportunities and challenges that could result from its passage.”

The Senate bill would still need to be reconciled with the version of the lower house before being transmitted to Malacañang for final approval.

“We hope that Congress will enact more laws that will make Bayanihan 2 permanent and strengthen it further. Also, we need more laws for less taxes and permit fees on telcos so that we can offer less expensive telecom and broadband services,” Castelo said.

According to April Lynn Tan, vice president, corporate strategy officer at COL Financial Group Inc., telco players are poised to benefit once the bill is passed into law.

For PLDT and Globe, she said, “there is still a possibility that their weighting in the MSCI index will increase given the possibility of higher foreign ownership.”

Dito CME, owned by Davao-based tycoon Dennis A. Uy, also benefits since it would allow greater foreign investment into Dito Telecommunity, which is in the midst of rolling out its network.

This would need to come from other foreign sources, however, since Section 16 of the Senate Bill prohibits foreign state-owned enterprises such as China Telecom from investing in telecommunications companies and similarly classified public services.

The Senate bill allows exemptions for sovereign wealth funds and independent pension funds, allowing each state to own up to 30 percent of public services.