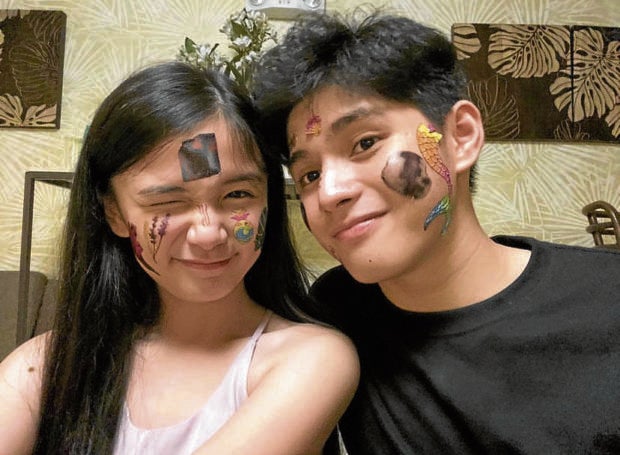 At 15 and 17, respectively, Sofia Pablo and Allen Ansay said that romance is still far from their minds.

“We’re friends for now because we’re still young. It’s not the right time. Perhaps when we’re grownups, but definitely not now. We’re focusing on our careers,” Sofia said in a recent virtual conference for “Regal Studio Presents,” a new weekly anthology of made-for-television movies produced by GMA 7 and Regal Entertainment.

“We spend most of our time planning our careers together … We want to keep getting better at our craft,” added Sofia, whose relationship with Allen has been a subject of curiosity for fans, because of their sweet and adorable vlogs and TikTok posts that have been doing big numbers online.

Do Sofia’s parents approve of Allen as her screen partner and close friend? “Boto po!” they said in unison. “We’re just enjoying our bonding moments together,” added Allen, who finished first runner-up in the seventh season of the talent search “StarStruck.”

Sofia and Allen, whose tandem is fondly called Team Jolly by their fans, will star in the series’ second offering “Raya Sirena,” on Sept. 18 at 8:30 p.m. Directed by Easy Ferrer, this movie is a modern-day fairy tale that has Sofia playing a social media celebrity, who magically transforms into a mermaid. Allen is her love interest.

They couldn’t be more thrilled to return to acting, after spending the past year off-camera, because of past COVID-19-related protocols for young actors. They had to leave the first book of the afternoon series of “Prima Donnas” as a result.

“We’re so thankful to be back. For the past year, we have been only focusing on vlogs, doing TikToks and other content online, because of the pandemic. We’re thankful to the fans—the reason our love team exists—for their continued support,” Allen said. “We haven’t worked in a long time and now, the blessing and opportunities are coming in.”

“We’re just waiting for the situation to get better, and the cases to go down before we start taping,” she said.

Regal and GMA 7 are no stranger to collaborations. The companies have previously produced well-loved television anthologies, like “Mother Studio Presents” in 1987 and “Regal Shocker” in 2011.

With cinemas still closed because of the pandemic, Regal has been focusing its resources on its partnership with GMA 7. “The creative team we use for our movies is the same team working on these ‘telemovies.’ Different writers are collaborating to come up with relevant and appealing stories for the young viewers,” Regal executive Roselle Monteverde-Teo said. “From the writers to directors, from preproduction to postproduction … scoring, mixing, the materials are treated like movies,” she said.

Roselle is also looking forward to working with ”non-Regal babies.” “We’re open to working with GMA 7 artists and different casting combinations. They can work for us even if they don’t have contracts with us. There’s that understanding between the two companies, and we want to work to come up with combinations that will benefit our projects.” INQ