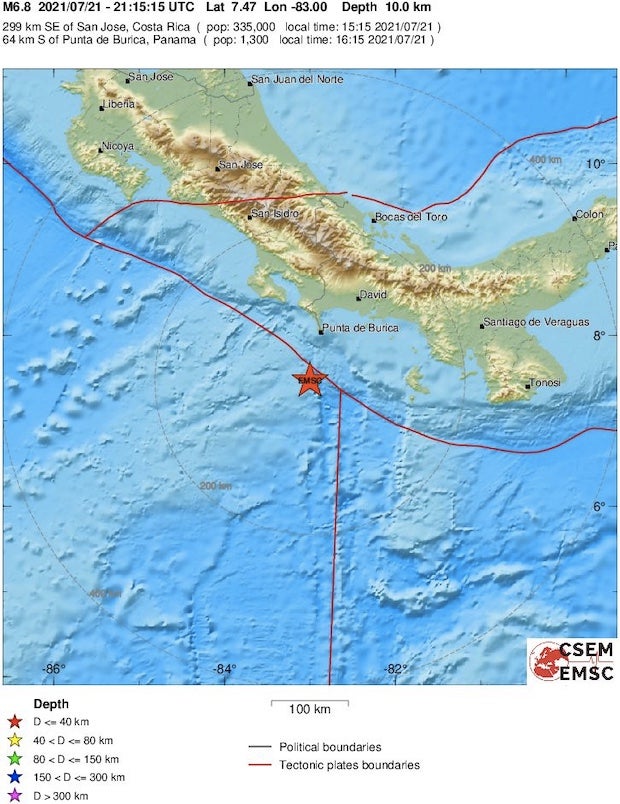 SAN JOSE/PANAMA CITY — A strong earthquake struck off the southern coast of Panama on Wednesday near the border with Costa Rica, although there were no immediate reports of damage and authorities said a tsunami was not expected.

The European-Mediterranean Seismological Centre (EMSC) said the earthquake had a 6.9 magnitude and hit at a depth of 2 km (1.2 miles) about 321 km (200 miles) southeast of Costa Rica’s capital, San Jose. The U.S. Geological Survey measured the quake at a 6.8 magnitude.

Quakes of that magnitude can cause severe damage.

“Regarding the earthquake we felt in almost the entire country, we report that we have no damage to public infrastructure or personal injuries,” said Alexander Solis, head of Costa Rica’s National Emergency Commission.

A Reuters witness said the quake was felt in San Jose.

“Our team continues to monitor the areas where the earthquake this afternoon was perceived. No damage has been reported yet,” Panama’s civil protection agency said on Twitter.

Another Reuters witness in Panama City said the shaking was not felt there.