Senators extol Vico Sotto after US recognition as 'anti-corruption champ' 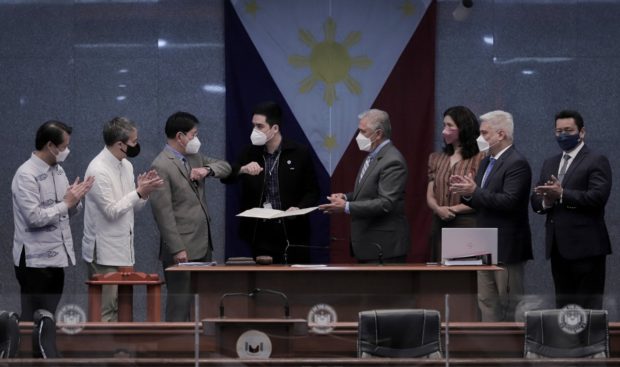 MANILA, Philippines — The Senate on Monday commended Pasig City Mayor Vico Sotto after he was hailed by the U.S. State Department as one of its “anti-corruption champions.”

The senators adopted Senate Resolution No. 660 extolling the young local chief executive for his “outstanding leadership” in Pasig City and the competent management of his town’s response to the Covid-19 pandemic.

During the plenary session, the mayor personally received the commendation from the chamber.

“‘Sana all.’ Like any millennial, and even those who are not would normally say when one is hopeful that a pleasant situation that happened to another would likewise happen to them. These are the exact words that people usually utter when they talk about Mayor [Vico Sotto] since his election as Pasig City Mayor in 2019. Sana all taga-Pasig, sana all katulad ni Mayor Vico Sotto,” the Senate president said.

“What he has accomplished as someone who is relatively new in the political arena is truly impressive and laudable, to say the least. No wonder a lot would really say ‘sana all’,” he added.

In naming the Pasig mayor as one of its 12 International Anti-corruption Champions, the U.S. State Department described him as a “ who prioritize anti-corruption and transparency initiatives in their election campaigns and in office.”

“Mayor Vico, my dear inaanak, I already knew from the start that you are destined for greater heights. Your journey is still long and your tasks are many, if not endless,” the Senate president went on.

“But with your current unparalleled achievements. I’m certain that there is nothing you cannot accomplish,” he added.

Lacson, for his part, said Pasigueños “are fortunate that they have gotten themselves a leader who embodies wise thoughts, prudent actions, and selfless intention to advance the well-being of his constituents.”

“This is my third term in the Senate, having served this chamber for more than 16 years. This is my very first authorship and sponsorship of a resolution honoring either a public or private person, whether dead or living. Simply put, I thought I should not let this opportunity pass not to recognize a rare feat in public service,” he added.

Senator Joel Villanueva praised the mayor for making sure that his constituents are involved in matters affecting the city budget.

Before its adoption, all members of the Senate were made co-authors of the resolution.