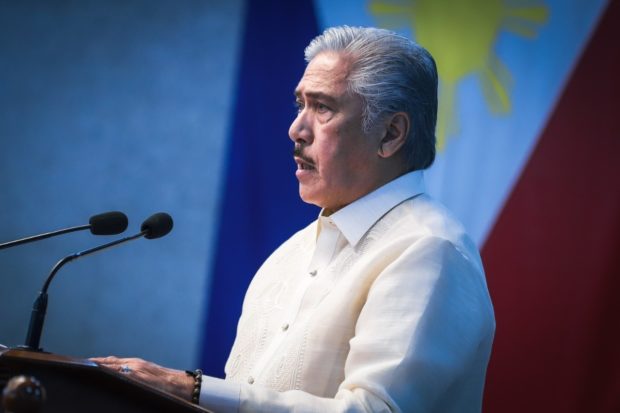 MANILA, Philippines — Senate President Vicente Sotto III is unfazed by a supposed plot to oust him while Senate Majority Leader Juan Miguel Zubiri on Monday downplayed such a move, raising the possibility that it may just be initiated by “overeager” senatorial staff members.

“I serve at the pleasure of my colleagues. Therefore, I don’t really pay much attention to it. Because if ever they would want a new leadership or a new leader they will tell me about it, whoever is behind it,” Sotto said in an online interview after the Senate opened its third regular session for the 18th Congress.

“If there are 13 members of the Senate who wish to have a different leader, they can do that anytime. They’re more than welcome. Kaya OK lang sakin yun, ‘di ako nagaalala doon [I’m OK with it, I’m not worried about it],” he added.

The supposed plan to replace Sotto as the leader of the upper chamber surfaced after Sotto confirmed he will be joining the vice presidential race in 2022.

Over the weekend, Senator Panfilo Lacson, who also recently confirmed he will be gunning for the presidency with Sotto as his running mate, said there was

But Lacson said the plan, supposedly initiated by a member of the Senate’s majority bloc, did not materialize.

“Based on the reports that I got and I gathered, ano lang, it was a report coming from one of the employees lang,” Sotto told reporters.

(Based on the reports that I got and I gathered, it was only a report coming from one of the employees.)

He also said that Senators Bong Go and Ronald “Bato” dela Rosa, both from the majority bloc, approached him during Monday’s session and said they had nothing to do with the supposed plot to oust him.

“I don’t think it will come from the minority bloc,” Sotto also pointed out.

“What I can confirm is that there was a report to that effect, ganun lang [it’s just that], I cannot really say that the attempt was there. At most, it was an idea,” he said.

(Maybe someone thought of it but it did not materialize, maybe it fizzled out)

Zubiri, in a separate online interview with reporters, also downplayed the alleged plan to unseat Sotto from the Senate leadership.

(No one approached me during the break for any resolution or any move to oust Sotto, I only heard it through a staff member, maybe it’s just gossip or maybe it was initiated by the staff.)

Zubiri called for an end to discussions of leadership change in the upper chamber, saying the Senate should focus on ensuring that priority measures are passed on time.