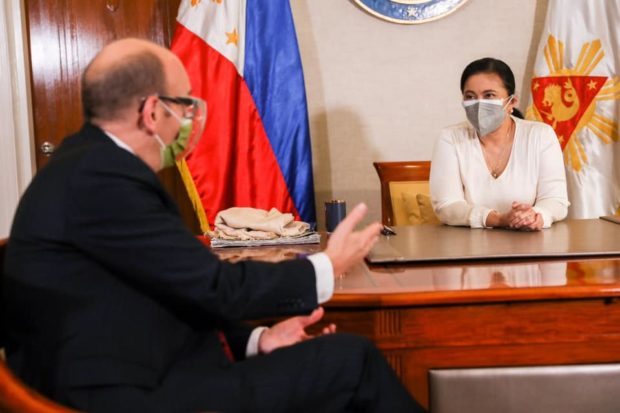 MANILA, Philippines — Vice President Leni Robredo has expressed gratitude to outgoing British Ambassador to the Philippines Daniel Pruce for helping the country in negotiating the procurement of COVID-19 vaccines from AstraZeneca, one of the first coronavirus vaccines granted emergency use authorization in the country.

Robredo made the remarks after Pruce paid a courtesy call on Thursday, months before the end of his tour of duty in the Philippines in August.

“British Ambassador to the Philippines Daniel Pruce paid us a courtesy visit this afternoon. He ends his four-year assignment in the Philippines in August.  This year, we are celebrating the 75th Anniversary of the establishment of bilateral relations between the Philippines and the United Kingdom,” Robredo said in a Facebook post.

British Ambassador to the Philippines Daniel Pruce paid us a courtesy visit this afternoon. He ends his 4-year…

“We also commended the assistance of the good ambassador and the British Embassy in the negotiations for the procurement of Astra Zeneca vaccines,” she added.

Aside from the vaccine procurement, Robredo also thanked the (UK) for acknowledging the importance of Filipino health workers in their country, in battling the COVID-19 pandemic.

According to Robredo, this is a testament to the strong ties between the two countries.

“We thanked the good ambassador for the tribute Prime Minister Boris Johnson made to our Filipino health workers in the UK and the important role they continue to play in their COVID response operations. We likewise expressed our gratitude for the heartfelt message gave the Filipino people during our last Independence Day celebration,” she noted.

“They are testaments to the high regard accorded to Filipinos in the UK and the close ties that our countries and our peoples enjoy,” she said.

AstraZeneca’s vaccine, made by pharmaceutical company AstraZeneca and the University of Oxford, was among the first used by the country, along with Sinovac Biotech’s CoronaVac.

As of now, are expected to arrive, through the COVAX facility, actual purchases, and .