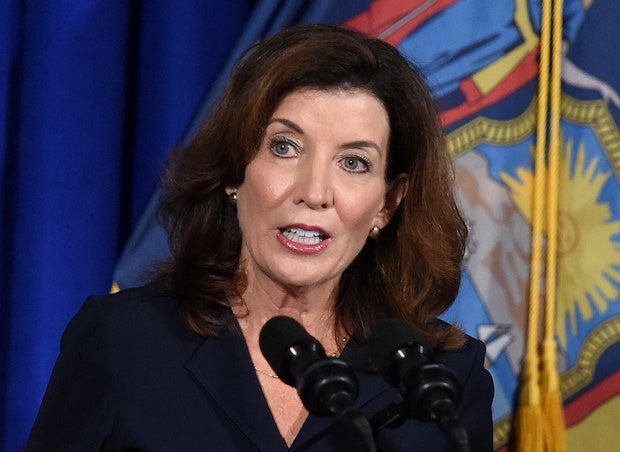 NEW YORK — Incoming New York Governor Kathy Hochul said on Sunday that she supported mask mandates for children in school as a necessary safety step for helping New York get through a new wave of COVID-19 infections.

Hochul, speaking in an interview on CNN’s “State of the Union” program, said masks for kids in schools was “something that I believe has to occur” for the safety of children, teachers, school administrators, and the wider community. She added however that she would remain flexible and consider all options as the circumstances of the pandemic continue to change.

National Institutes of Health Director Francis Collins told Fox News on Sunday that outbreaks are happening in schools where kids are not wearing masks, forcing them to go back to distance learning. Collins said there was a “very strong” case for masks in schools.

Hochul takes office later this month to complete the unexpired term of Andrew Cuomo, who is stepping down after the state’s attorney general found he sexually harassed 11 women and presided over a toxic workplace.

Hochul said that she intended to work out a strategy for boosting the vaccination rate together with current New York City Mayor Bill de Blasio and the incoming mayor, widely expected to be Democratic nominee Eric Adams.

“You have smart people, I have smart people, how about doing it together and not in competition?” Hochul said of her attitude toward the city’s executive, in stark contrast with Cuomo, who publicly feuded with de Blasio for years.

The United States is experiencing a new surge in the COVID-19 pandemic, driven by the more infectious Delta variant and dipping vaccination rates.

Hochul also said in Sunday’s interview that she lacked the power to require that school employees be vaccinated before returning to the workplace, because it was an authority only the legislature could bestow on the governor.

“I’m willing to speak to our legislative leaders and to take whatever action I need to to protect people,” she said.

California on Wednesday became the first U.S. state to require that teachers and other school staff be vaccinated or regularly tested for COVID-19, a move the Democratic governor called a “responsible step.”

Meanwhile, Republican-led states such as Texas and Florida are fighting to enforce and uphold in court their governors’ ban on mask mandates.