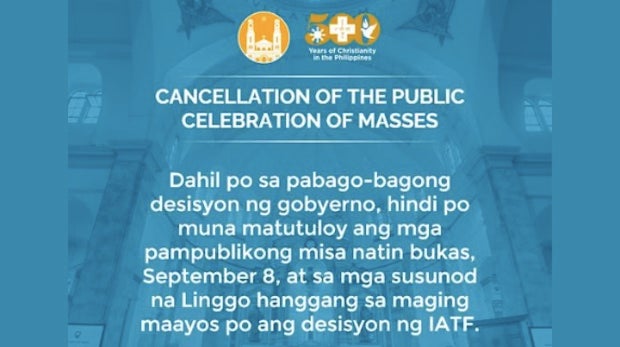 MANILA, Philippines —  Several parishes in Metro Manila decided to just maintain its suspension of public Masses until the government can give a definite decision on the quarantine status of the region.

The San Fernando de Dilao Parish in Paco, Manila posted an announcement in Filipino on Facebook, saying: “Because the government keeps changing its decision, our public Masses will not push through tomorrow, September 8, and on the following Sundays until the IATF can make a fixed decision.”

The IATF is the Inter-Agency Task Force for the Management of Emerging Infectious Diseases.

Church-goers were then urged to head to the Facebook page or YouTube channel of the parish for a live stream of its Masses.

Other parishes also had similar posts, giving the government a nudge in announcing their own suspension of public Masses.

Mary Comforter of the Afflicted Parish in Pasay was less subtle: “We don’t what really is the decision of the government. So tomorrow we will return to MECQ [modified enhance community quarantine. In the meantime, we will not have public Holy Masses yet.”

Posted by Mary Comforter of the Afflicted Parish on Tuesday, September 7, 2021

The San Antonio de Padua Parish in Cubao, Quezon City has a more humorous approach: “It accepted the challenge yesterday but backed out today.” And then the rest of the message was similar to the others.

Metro Manila was supposed to shift to the more lenient general community quarantine starting Wednesday, Sept. 8, until Sept. 30, 2021. But the government just a day before its implementation.

Specific rules of the shift in strategy have yet to be released as of Tuesday, which was supposed to be the last day of MECQ in the region.