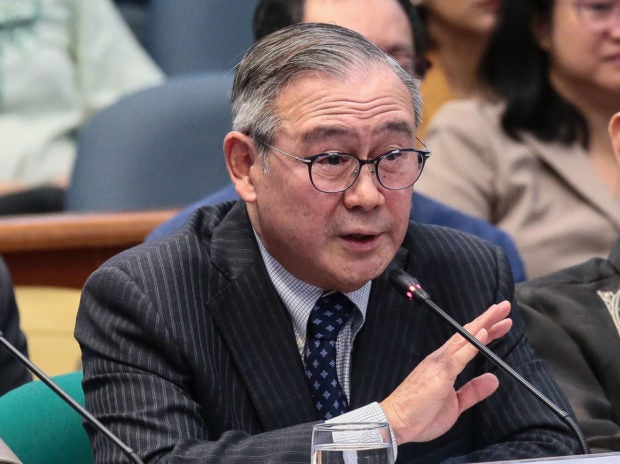 MANILA, Philippines — “There is only one voice on what’s ours: mine. Period.”

“There is only one voice on what’s ours: . Period. Not even the military has any say. I speak for the President on this subject,” Locsin said on Twitter Tuesday night.

In another tweet, Manila’s top diplomat also told the Palace spokesman to “drop the subject and leave it entirely to the Department of Foreign Affairs (DFA) under ME, the only expert on the subject bar none.”

Locsin’s post, this time, was in reaction to Roque’s response when asked in a Palace briefing earlier Tuesday on China’s continued militarization in the West Philippine Sea.

“I’ve known China since 1967; [Philippine Ambassador to China] Chito Sta. [Romana] along with me. Even the military has nothing to do with foreign affairs,” Locsin’s tweet further read.

Earlier Tuesday, Roque downplayed the parking of Chinese vessels at Julian Felipe Reef, saying the issue was merely “bloated” because area had “never” been in the possession of the Philippines.

According to Roque, the reef is not even in the country’s EEZ, but the lingering presence of Chinese vessels there was the subject of numerous diplomatic protests recently lodged by the DFA.

Nevertheless, the Palace official said it would be in the country’s interest to “pursue our claim” in the reef.

“While Julian Felipe Reef is not within our Exclusive Economic Zone (EEZ) because it forms part of the territorial sea of McKennan which we claim in accordance with the Marcos Presidential Decree, it is in our country’s interest to continuously pursue our claim through diplomacy or in the future by submitting it to the jurisdiction of the International Court of Justice,” Roque said in a separate statement.

Julian Felipe Reef is about 175 nautical miles west of Bataraza, Palawan, well within the 200-nautical mile EEZ rule according to the United Nations Convention on the Law of the Sea (UNCLOS).

This was not the first time Locsin called out Roque for making statements on the country’s foreign policy. Back in February, Locsin told Roque back in February to “just lay off” foreign affairs.

Roque denied, however, that he was “.”

He added that it would be hard to stay mum when he was speaking for President Rodrigo Duterte, whom he described as the “chief architect” of the country’s foreign policy.