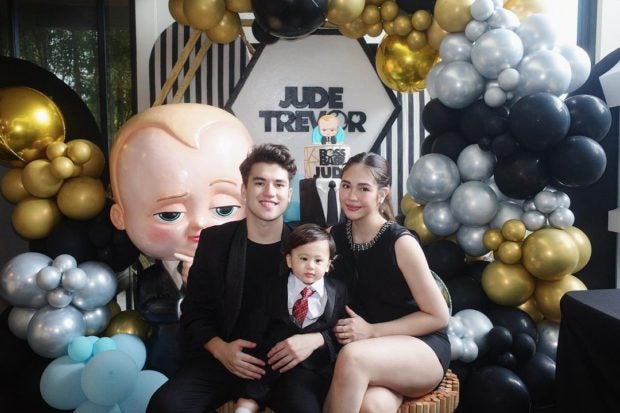 Janella Salvador and Markus Paterson’s son Jude got to be the Boss Baby from the hit DreamWorks movie as the couple pulled off a themed party to celebrate his first birthday.

Salvador gave fans a glimpse of the intimate, at-home celebration on her Instagram page yesterday, Oct. 24. The party featured a statue of the infant from the film, a “The Boss Baby”-themed cake and a backdrop with an arrangement of black, silver and gold balloons.

Baby Jude wore a black suit while everyone else who attended also wore black. In attendance was Salvador’s mother, singer-actress Jenine Desiderio.

“Planning a party in the middle of a pandemic is difficult, but so is keeping a one-year-old baby (who loves to move around and cries when people collectively sing him the happy birthday song) [in a suit] happy during picture taking,” Salvador said.

“Nonetheless, it was a wonderful and intimate little party spent with family and close friends. Thank you for loving our boss baby and for being there to celebrate his first year of life,” she added.

Salvador and Paterson confirmed their relationship in September 2020. The actress reportedly gave birth to Jude in the United Kingdom last year. The couple did not reveal that they are until January this year. JB