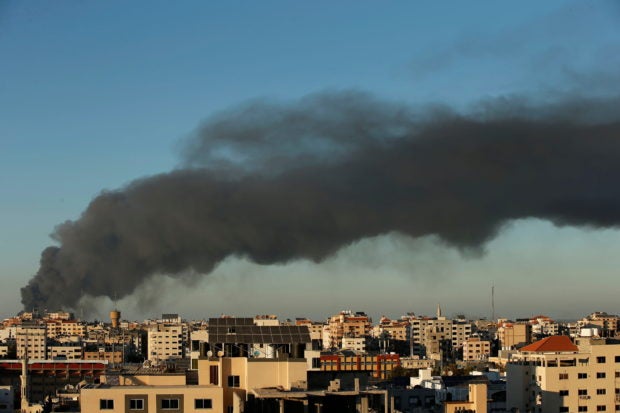 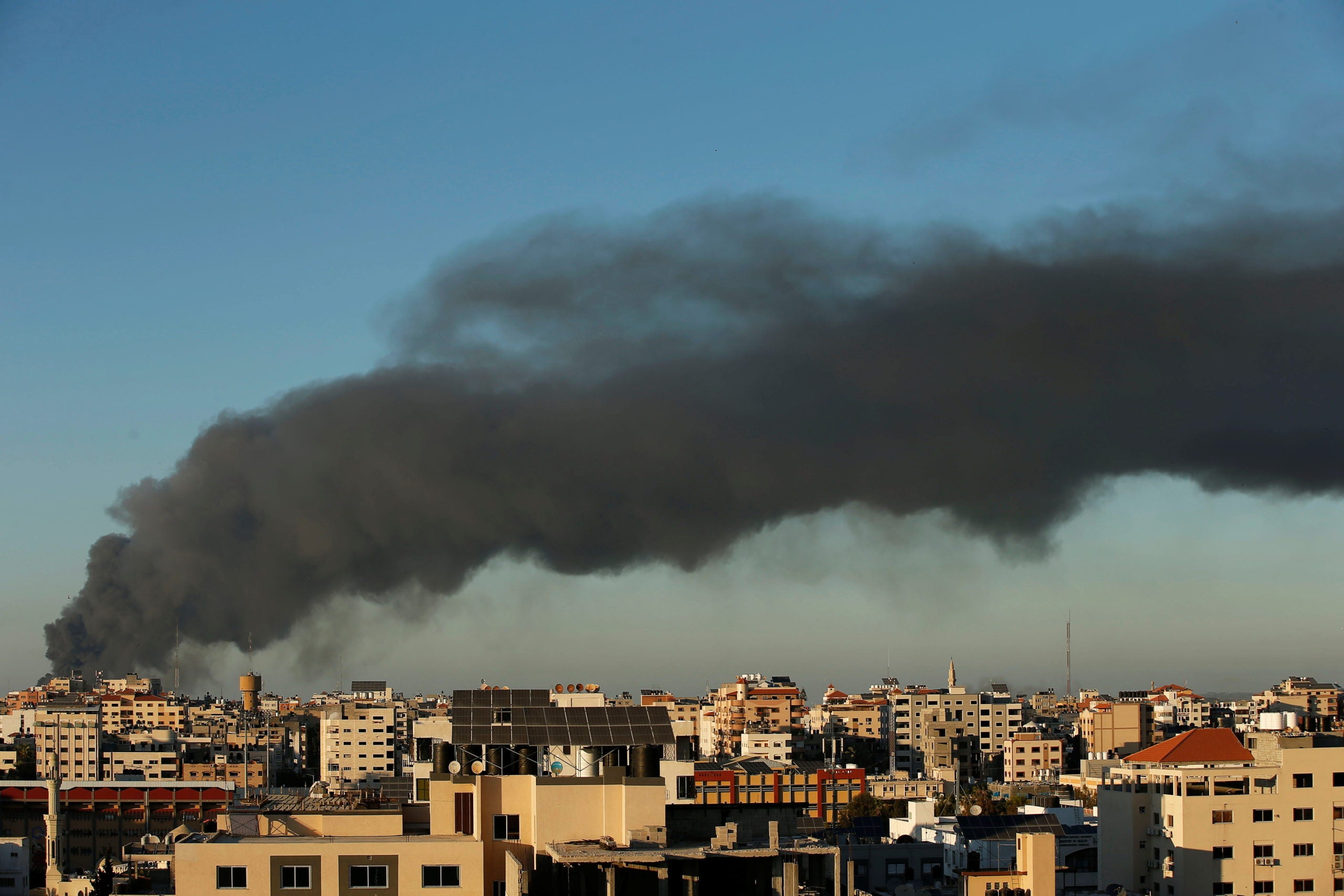 Smoke rises amid a flare-up of Israeli-Palestinian violence, in Gaza May 15, 2021. REUTERS/Suhaib Salem

GAZA/JERUSALEM — Israel bombed the home of Hamas’s chief in Gaza early on Sunday and the Islamist group fired rocket barrages at Tel Aviv as hostilities stretched into a seventh day with no sign of abating.

At least three Palestinians were killed in Israeli air strikes across the coastal enclave, health officials said, and many were injured as the sounds of heavy bombardment roared through the night.

Israelis dashed for bomb shelters as sirens warning of incoming rocket fire blared in Tel Aviv and its suburbs. Around 10 people were injured while running for shelters, medics said.

At least 148 have been killed in Gaza since the violence began on Monday, including 41 children, health officials said. Israel has reported 10 dead, including two children.

Envoys from the United States, United Nations and Egypt were working to restore calm but have yet to show any signs of progress. The U.N. Security Council was due to meet later on Sunday to discuss the worst outbreak of Israeli-Palestinian violence in years.

Both Israel and Hamas have insisted they would continue their cross-border fire, a day after Israel destroyed a 12-storey building in Gaza City that had housed the U.S. Associated Press and Qatar-based Al Jazeera media operations.

The Israel military said the al-Jala building was a legitimate military target, containing Hamas military offices, and that it had given warnings to civilians to get out of the building before the attack.

The AP condemned the attack, and asked Israel to put forward evidence. “We have had no indication Hamas was in the building or active in the building,” the news organisation said in a statement.

In what it called a reprisal for Israel’s destruction of the al-Jala building, Hamas fired rockets at Tel Aviv and towns in southern Israel early on Sunday.

Prime Minister Benjamin Netanyahu said late on Saturday that Israel was “still in the midst of this operation, it is still not over and this operation will continue as long as necessary.”

In a burst of air strikes early on Sunday, Israel targeted the home of Yehya Al-Sinwar, who since 2017 has headed the political and military wings of Hamas in Gaza, the group’s TV station said.

Hamas began its rocket assault on Monday after weeks of tensions over a court case to evict several Palestinian families in East Jerusalem, and in retaliation for Israeli police clashes with Palestinians near the city’s Al-Aqsa Mosque, Islam’s third holiest site, during the Muslim holy month of Ramadan.

Speaking to crowds of protesters in the Qatari capital of Doha, Hamas chief Ismail Haniyeh said late on Saturday that the underlying cause of the hostilities was Jerusalem.

“The Zionists thought … they could demolish Al-Aqsa mosque. They thought they could displace our people in Sheikh Jarrah,” said Haniyeh.

Hamas, Islamic Jihad and other militant groups have fired around 2,300 rockets from Gaza since Monday, the Israeli military said on Saturday. It said about 1,000 were intercepted by missile defences and 380 fell into the Gaza Strip.

Israel has launched more than 1,000 air and artillery strikes into the densely populated coastal strip, saying they were aimed at Hamas and other militant targets.

Earlier this week, the International Criminal Court’s chief prosecutor, Fatou Bensouda, told Reuters the court was “monitoring very closely” the latest escalation of hostilities, amid an investigation now under way into alleged war crimes in earlier bouts of the conflict.

U.N. Secretary-General Antonio Guterres reminded “all sides that any indiscriminate targeting of civilian and media structures violates international law and must be avoided at all costs,” U.N. spokesman Stephane Dujarric said in a statement on Saturday.

There has been a flurry of U.S. diplomacy in recent days to try to quell the violence.

But any mediation is complicated by the fact that the United States and most western powers do not talk to Hamas, which they regard as a terrorist organisation. And Abbas, whose power base is in the occupied West Bank, exerts little influence over Hamas in Gaza.

In Israel, the conflict has been accompanied by violence amongst the country’s mixed communities of Jews and Arabs, with synagogues attacked and Arab-owned shops vandalised.