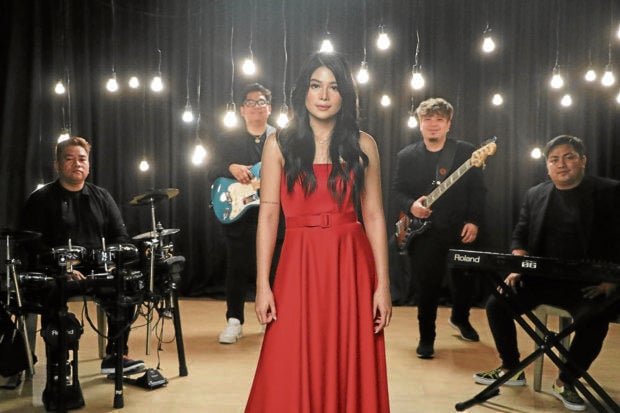 There have been times, Gigi de Lana admitted, when she went behind the microphone just to go through the motions. But she can’t afford to do that with her debut single, “Sakalam,” she said, because the song demands that she imbibe its message and let her emotions out.

“I must admit that, as a singer, there were inevitable moments when I didn’t really feel a song. Sometimes, when I get too tired, I’m unable to fully analyze a song’s meaning. But Sakalam is something I can easily relate to because of my experiences in life,” she said in a recent virtual conference.

“When I sing it, I put myself in it and I feel the pain. It makes me want to sing it in a way that’s full of life and soul,” she said of her single, which will lead her full-length album slated for a 2022 release under Star Music. “The fans have heard it and they tell me that it’s painful and makes them cry.”

The 25-year-old music artist previously made the rounds of the television talent search circuit: She was a finalist in the GMA 7 tilt “Popstar Kids” in 2007 and in the “Eat Bulaga” voice impersonation segment “Ikaw at Echo: Ka-Voice ni Idol” in 2013. She gained more prominence when she joined “Tawag ng Tanghalan” in 2016.But it wasn’t until this year that she hit her career’s biggest breakthrough. With no live shows allowed due to the pandemic, she took her music bar-esque jamming sessions to social media and streaming platforms. Backed by her band called The Gigi Vibes, she would live stream 2.5-hour sets, where she performs covers of well-loved local and foreign songs.

Her online shows were big hits, the most popular of which has been streamed 6.1 million times on YouTube. But while her gig continues to enjoy consistent and strong viewership, Gigi also hopes to expand her catalog with more original material. And she hopes that Sakalam can serve as a springboard.

Written by her bandmate Romeo Marquez and musician Edwin Lacsa, and produced by ABS-CBN Music creative director Jon Manalo, Sakalam—a play on the word “malakas”—is a power rock ballad about one’s struggle to let go of a relationship with someone already emotionally detached. “We’re happy, because we didn’t give up on our goal. We were able to come up with a beautiful song as our first single,” Gigi said of her bandmates, who also include Jon Cruz, LA Arquero and Jake Manalo.

Shooting the music video was an emotional roller coaster. “I had lots of emotions during shooting. There was a portion where I couldn’t express myself, because I didn’t want to revisit or relive those painful times and feelings that I have been trying to shut off,” she said.

The gravity of theme is disguised behind an upbeat pop-rock arrangement inspired by her favorite artists and acts like Paramore and Avril Lavigne. “But the song isn’t just about heartbreak. There’s also some positive vibes. It says to take things easy or slow; to leave something for yourself,” she said. “That it’s OK to get hurt, because it’s part of growing up and the learning process.”

On the more technical side, Gigi said the single allows her to embrace her natural vocal tone. “Back then, I used to mimic other artists’ styles. But in the long run, you have to have your own voice and identity… the kind of voice that’s easily recognizable on the radio,” she said. “Now it’s nice to hear my real voice.” INQ