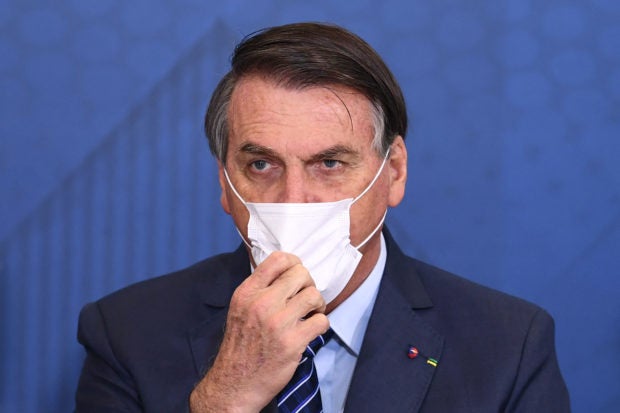 BRASILIA — President Jair Bolsonaro said Wednesday the novel coronavirus may have been made in a laboratory to wage “biological warfare,” in the latest comments likely to strain Brazil’s relations with China.

“It’s a new virus. Nobody knows whether it was born in a laboratory or because a human ate some animal they shouldn’t have,” said the far-right leader.

“But the military knows all about chemical, biological and radiological warfare. Could we be fighting a new war? I wonder. Which country’s GDP has grown the most?”

He did not name China, but the country where the pandemic began was the only G20 economy to grow last year, notching a 2.3 percent expansion.

Bolsonaro and his inner circle have a history of inflammatory comments on China that have sometimes aggravated relations with Brazil’s biggest trading partner.

In March, the president replaced former foreign minister Ernesto Araujo, who had denounced “Maoist China” and its plan for “world domination,” with career diplomat Carlos Franca.

The move was widely seen as aimed at mending ties.

The theory that Covid-19 emerged in a virology lab in the city of Wuhan is a touchy subject for China — but a favorite of hardline supporters of both Bolsonaro and his political role model, former US president Donald Trump.

A World Health Organization report concluded in March it was “extremely unlikely” the virus originated in a lab.

However, WHO experts said they had encountered difficulties accessing raw data when they visited Wuhan.

Bolsonaro faces criticism and even a Senate inquiry over his response to Covid-19, which has claimed more than 400,000 lives in Brazil.

He upped his attacks Wednesday on stay-at-home measures by local authorities to contain the virus, threatening to issue a decree protecting people’s “right to come and go.”

Bolsonaro has fought calls from experts for national restrictive measures, arguing the economic damage would be worse than the virus itself.

But Brazil’s Supreme Court has given states and municipalities the right to implement such policies.

“I hope to God I won’t have to issue that decree. But if I do, it will be carried out with all the force my ministers have,” Bolsonaro said.

“And nobody had better dare challenge it.”