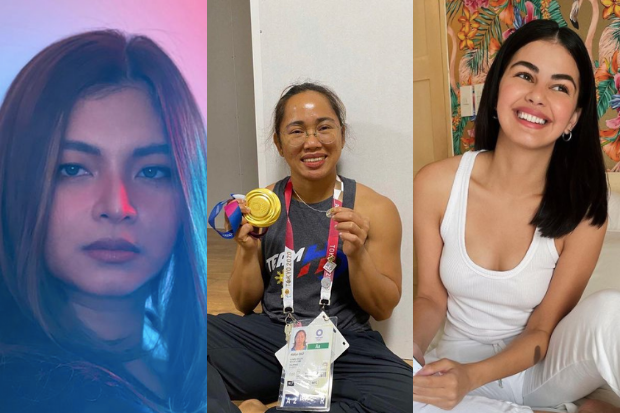 Diaz ended the Philippines’ drought for a gold medal since it began participating in the Olympic Games in 1924. She delivered the by lifting a total of 224 kilograms, beating China’s world record holder Liao Quiyun.

Locsin congratulated Diaz for her achievement while showing a throwback photo with the athlete on her Instagram page, also yesterday.

“Sana makapagpa-picture uli ako sayo. Saludo, @hidilyndiaz,” the actress told the Olympian. (I hope I can take another picture with you. Salute, Hidilyn Diaz.)

Meanwhile, Gutierrez described Diaz as a “hero,” with her victory coming right after President Rodrigo Duterte delivered his last State of the Nation Address, which drew flak from critics for its “” among others.

“Hidilyn Diaz winning the first-ever gold medal for the Philippines is the hero we need on SONA day,” she said through her Twitter page on the same day.

For her part, actress Anne Curtis thanked Diaz for “sparking a fire” in young women and children, as seen on her Twitter page, also yesterday.

“What a proud moment for the Philippines! Thank you Hidilyn Diaz,” she said. “First place medal I’m sure you’ve sparked a fire in little girls, in fact, in all children across the country that with hard work [and] dedication they can fulfill their biggest dreams!”

Nakakaiyak! What a proud moment for the Philippines! Thank you @diaz_hidilyn 🥇 I’m sure you’ve sparked a fire in little girls, in fact, in all children across the country that with hard work & dedication they can fulfill their biggest dreams! MARAMING SALAMAT 🇵🇭 https://t.co/fngaqBWmaj

Actor Enchong Dee also applauded Diaz through his Twitter and Instagram pages yesterday. He added that the athlete will now be “forever honored” in the country’s history.

(Thank you so much, Hidilyn. History will forever honor you. The whole country applauds you. I am so happy for you.)

It can be recalled that both sports personalities were included in the supposed back in 2019, after Diaz spoke up about her plight as an athlete. Diaz denied involvement in the supposed plot and asserted that she was only focused on her weightlifting training and career.

Singer Lea Salonga, meanwhile, was moved after witnessing the Philippine nation anthem played for the first time during the awarding ceremony.

“The most emotional part was hearing our National Anthem being played. Nic and I stood, hands on hearts, and cried. Mabuhay ka, Hidilyn Diaz!” Salonga said.

The most emotional part was hearing our National Anthem being played. Nic and I stood, hands on hearts, and cried. Mabuhay ka, @Diaz_Hidilyn! pic.twitter.com/hUQdY4obeM

Diaz received congratulatory greetings from many other celebrities, including Bela Padilla, Sarah Lahbati, Iza Calzado, Ogie Alcasid and Jodi Sta. Maria. She also thanked those who prayed for her in her Olympic journey, through her Instagram Story.

“Thank you for praying,” she said, while holding up her medal.

Diaz’s medal was the earned by the Philippines and is the only gold. She is the second athlete to win multiple Olympic medals, joining swimmer Teofilo Yldefonso who won bronze in the men’s 200-meter breaststroke in 1928 and 1932. JB