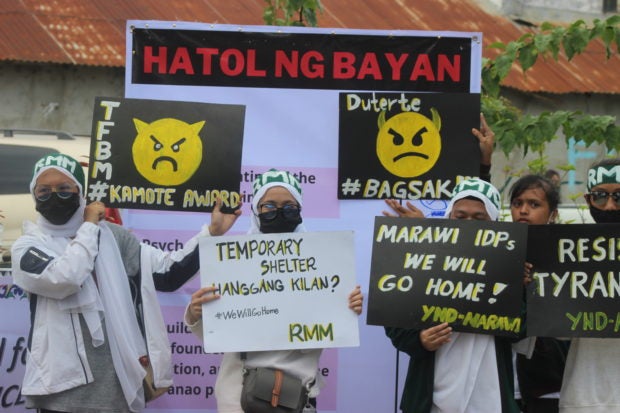 MARAWI CITY––President Duterte should apologize to thousands of Marawi residents unable to return to their homes and communities after being displaced by the five-month war in the city between government troops and Islamic State (IS) terrorists four years ago.

Mindanao State University Prof. Tirmizy Abdullah, one of the conveners of the Marawi Advocacy Accompaniment (MAA), said the apology may be made during Duterte’s last State of the Nation Address (Sona), when his performance is measured by the people.

“The ultimate test of (the success of) Marawi rehab is the safe and dignified return of the IDPs,” Abdullah pointed out.

Displaced residents and civil society groups have described as “a dismal failure” by the Duterte administration’s performance in rebuilding this city from the ashes of the 2017 war that ruined its commercial district that used to be Dansalan, a centuries-old settlement that would grow into today’s Marawi.

The government’s rehab program for the city is overseen and coordinated by Task Force Bangon Marawi (TFBM). A government assessment in 2018 pegged the cost of rebuilding the city at P70 billion, mainly to restore public infrastructure.

The area most affected by the fighting spans some 250 hectares and comprises 24 villages where over 17,000 families used to live, per profiling done by the TFBM.

“In our view, the rehab effort is a dismal failure. For one, the government has backtracked on its promises and failed at consulting relevant stakeholders in planning and implementing the programs for rehabilitation,” said Amenodin Cali, chair of Kalimudan sa Ranao Foundation, Inc.

According to Cali, “there is no other testament to that failure than the thousands of internally displaced persons (IDPs) who continue to live in squalid conditions in temporary shelter communities.”

“Four years is a long time. Had it been done wholeheartedly, the Marawi rehab program could have achieved a good measure of relief for the displaced people of the city,” Cali explained.

As of June, the United Nations High Commissioner for Refugees (UNHCR) counted 17,446 families, or close to 90,000 people, still displaced due to the 2017 siege.

The government has committed to building at least 2,000 permanent shelters for families not allowed to go back to lakeside and riverside areas. The rest of the families—-over 14,000—-have to fund the reconstruction of their homes.

Menchie Dangcal, another IDP leader, said they would need financial support to rebuild their houses, hence, looked forward to a reparation program through the proposed Marawi Compensation Bill, which is still pending in Congress.

Experts have said that without compensation for damaged and lost properties, families would not be able to rebuild their lives in the city.

On Saturday, MAA and the Reclaiming Marawi Movement (RMM) held the State of the Marawi Bakwit Address, an annual rite just before the president’s Sona, to call attention to issues of postwar rebuilding in the city.

During its fifth run on Saturday, the evacuees and activists conferred a ‘Palpak Award’ (award for failure) on the government.

After the remnants of IS forces were driven out in October 2017, it took two years before the battle ground was cleared of unexploded ordnance and debris from destroyed buildings.

But it was only in April this year that massive construction work began which, according to Housing Secretary and TFBM chair Eduardo del Rosario, could be mostly done by year’s end.

Abdullah said the rehab effort should have taken a central focus on the IDPs and not on grand infrastructure which, “if there should be a need for these, could have come later.”

“They (government officials) are showing the outsiders a new and beautiful Marawi but the reality is they are rebuilding the Islamic City the wrong way, unmindful of our culture, tradition, and beliefs as a people. They are constructing large-scale infrastructures that the people of Marawi don’t actually need,” Abdullah added.

“Thanks for the buildings, but what we want is to rebuild our lives,” said IDP leader Samira Pacalundong.

The groups faulted the government for excluding the evacuees in planning for the postwar rehab of the city, hence, the potential conflicts that have arisen now over land use and ownership.

The TFBM and the Marawi local government have required families to present land titles before they can rebuild their homes.

During his Sona in 2017, Duterte said: “The people of Marawi need help. Caught in the crossfire between government troops and Muslim extremists, they have been through hell and we need to help them rise and move forward.”

But four years after, youth leader Norlicah Macawadib, whose family now lives in a transitory shelter, said the best antidote for ensuring an effective Marawi rehab effort is to elect a president who truly feels the plight of the IDPs and “not just take them for a ride.”

As the 2022 election fever heats up, many Marawi residents observed that TFBM’s Del Rosario has been harping on public events about the supposed advantages for the city’s postwar rehab effort if Davao City Mayor Sara Duterte is elected president in 2022.

With the way it was done in the last four years, Macawadib reminded Maranaos to “think well about our choices in the 2022 elections. ”

“We have been fooled by (President) Duterte before. Do we want to be fooled yet again by (choosing) Sara Duterte?” Macawadib said.