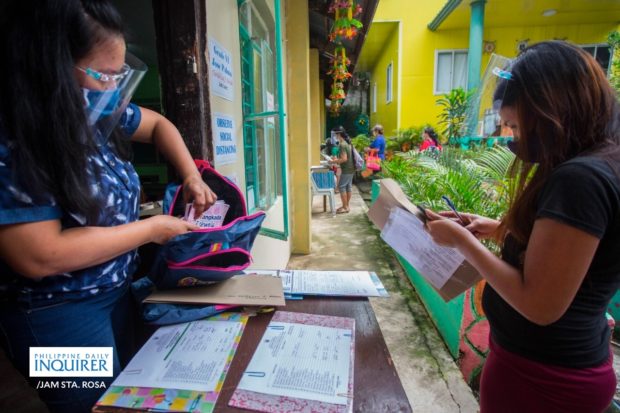 MANILA, Philippines — Seven senators were pressing for the immediate launch of a dry run for limited face-to-face classes in order to “avert a prolonged learning loss” and put the country’s education system “back on its tracks.”

Filed on Monday, Senate Resolution No. 668 “expresses the sense of the Senate to recommend the immediate launch of the pilot testing of localized limited” physical classes.

They sought the pilot testing in 1,065 public schools identified by the Department of Education (DepEd) “under risk-based assessment, following stringent mitigation measures and strict health protocols, to enable the department to gather evidence on the ground and design its framework for the safe reopening of schools.”

“To avert a prolonged learning loss and minimize other potentially profound adverse social, development, and health costs that learners will suffer, the DepEd needs to immediately launch its pilot testing of localized limited face-to-face classes in the identified 1,065 schools in low-risk areas,” the resolution read.

The senators believe that the dry run of physical classes will enable DepEd to gather evidence on the ground to guide its framework for the safe reopening of schools using a risk-based assessment to identify, analyze and reduce the risks affecting each school.

“The pilot testing will also guide the DepEd to set specific standards and health protocols to reopen schools safely, including the provision of safe learning facilities and public health supplies such as an adequate supply of safe water, sanitation areas, hand washing stations, soap, alcohol, and other cleaning materials,” they said.

The resolution also underscored the need to prioritize the vaccination of teachers to mitigate the risk of an adult-to-adult transmission in schools and “sustain the pilot testing of localized limited classes and the preparations for the eventual reopening of safe schools.”

The senators filed the resolution following four public hearings of the Senate basic education committee. The hearings sought to determine the impact of the pandemic on the country’s basic education sector.

The resolution cited the committee’s latest hearing wherein the United Nations Children’s Fund (Unicef) reported that the Philippines is the “only country in the East Asia and Pacific region where schools have remained closed since March 2020.”

“[G]lobally, there are only 13 other countries that have not opened schools since their respective lockdowns last year,” the resolution noted, citing Unicef.

“It was likewise reported during the said hearing that as of February 9, 2021, there are 433 municipalities and three cities in the country with zero active cases of Covid-19, and that the identified 1,065 schools that are projected to participate in the pilot study for localized limited face-to-face classes represent only around 2.2% of all the public schools nationwide,” it added.

DepEd Secretary Leonor Briones made a because, according to her, most learners, who have been cooped up for too long during the year-round lockdown, have been missing physical schooling and learning in an actual school.

But for the resumption of physical classes.

The President, however, allowed in January the resumption of limited face-to-face classes for medical and allied health programs in institutions located in general community quarantine (GCQ) and modified GCQ areas.