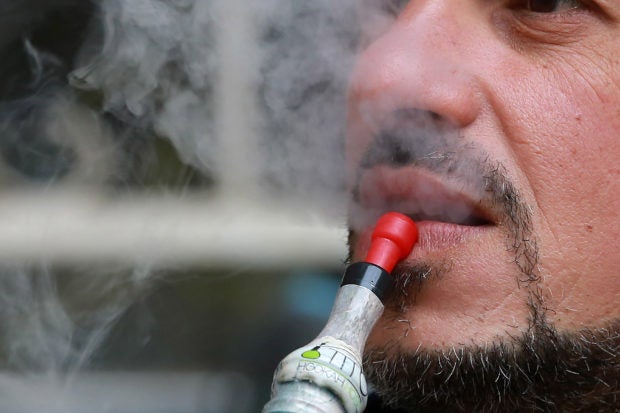 AMMAN — Already saddled with one of the world’s highest rates of smoking, Jordan has seen the numbers lighting up soar since coronavirus restrictions began last year, sparking fears of a double epidemic.

Mounir Shana, who sells hookah waterpipes in the capital Amman, was rarely seen without a cigarette dangling from his lips even before the crisis.

But draconian restrictions imposed by the government have increased his intake.

“I’ve been smoking more and more for the past year because of the psychological pressure of lockdowns,” said 24-year-old Shana, lighting a fresh cigarette from the butt of his previous smoke as he talked.

“From one to two packs a day before the epidemic, I went to four to five today.”

A survey by the University of Jordan’s Center for Strategic Studies in April 2020 found 52 percent said they were smoking more since pandemic restrictions began.

Shana spends some 300 dinars ($425) each month just to fuel his smoking addiction.

“I know the dangers and I suffer from chest pains,” he said.

“But what do you want me to do? When I am locked between four walls at home, tobacco gives me psychological comfort.”

Jordan has one of the highest rates of tobacco smokers in the world, with 70 percent of men lighting up, according to the World Health Organization in 2015 — second only to Indonesia, at 76 percent.

Eight out of 10 men aged 18 to 69 smoke, according to government statistics. Jordanians smoke an average of 23 cigarettes per day.

But medics fear the situation has grown worse since then.

“With the pandemic, tobacco consumption has increased because of the psychological state of the population,” said Abeer Mowaswas, a health ministry information official.

Since the coronavirus pandemic broke out, Jordan has imposed a series of restrictions, including curfews.

The WHO warns that since smoking impairs lung function — making it harder for the body to fight off respiratory diseases — smokers are likely “at higher risk of developing severe Covid outcomes and death”.

Rates for women in Jordan are lower, as smoking is frowned upon in traditional Muslim society.

But while a fifth of women smoke tobacco or e-cigarettes, over three-quarters suffer from second-hand smoke at home, from male family members lighting up.

“My husband doesn’t stop smoking; whether he is happy or angry, he always has a cigarette in his mouth. At 41, his teeth are yellow from nicotine,” said Hanane, a 37-year-old housewife.

“But the worst part is that he smokes at home in front of me and our four children. There’s nothing we can do about it. We have become passive smokers and when I tell him off, he tells me he can’t stop”.

Faced with the problem, the government has increased the number of addiction centers to help people stop smoking from five to 20, launched a social media campaign and set up telephone hotlines, said Mowaswas.

Over half of deaths in Jordan every year are due to smoking, she said.

“Every year, 9,000 people die because of tobacco and tobacco-related diseases,” she said, adding that tobacco costs the state some $300 million.

Last year, the government banned smoking in enclosed public places, but from cafes to malls, the rules are widely flouted.

An MP was even photographed during a parliamentary debate having puff on a cigarette — in front of a sign that read “no smoking”.

Hala Boukerdenna, a WHO official in Jordan, stressed the need “to make additional efforts, especially to protect non-smokers from second-hand smoke”.

A smoker for 33 years, bus driver Mohammad Abou Khadra chose a centre in the east of Amman for a final attempt to quit.

The 53-year-old father of five, who suffers from diabetes, hypertension and shortness of breath, hopes this time it will work.

But nothing is guaranteed, said Dr Anas Al-Mohtaseb, who is supervising his treatment.

The medic treated 125 patients last year — with a success rate of just over one in five.