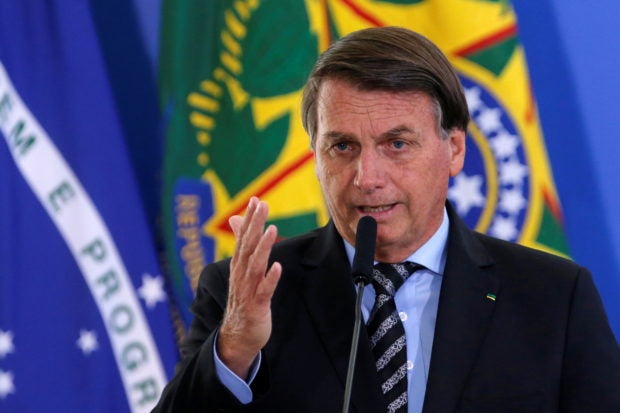 BRASILIA — Brazil’s president Jair Bolsonaro announced Monday that he will appoint cardiologist Marcelo Queiroga as health minister, the fourth to hold the post during the pandemic, as the country’s health system staggers amid surging Covid-19 cases.

“It was decided now in the afternoon to appoint physician Marcelo Queiroga to the Ministry of Health,” Bolsonaro said in a brief meeting with his supporters at the Alvorada presidential palace.

The transition process “should take one or two weeks,” he added.

The appointment will be finalized Tuesday. Bolsonaro made the announcement after meeting with Queiroga, and hours after current health minister Eduardo Pazuello told a press-conference that the president was seeking to replace him to “reorganize” the ministry.

“The conversation (with Queiroga) was excellent,” Bolsonaro said. “He has everything in my opinion to do a good job, giving continuity in everything Pazuello did until today.”

The appointment of Queiroga, the president of the Brazilian Society of Cardiology (SBC), comes as Bolsonaro’s government faces harsh criticism for its chaotic handling of the coronavirus pandemic and denials of the severity of the crisis.

“From now on we are going to a more aggressive phase regarding the fight against the virus,” far-right Bolsonaro said.

Before leaving office, Pazuello announced the government had purchased 100 million doses of the Pfizer-BioNTech vaccine, which should be delivered by September. He also said that some 38 million doses of Johnson & Johnson’s single-shot vaccine should arrive in the second half of 2021.

The completion of the purchase is vital to speed up Brazil’s vaccination campaign, as the country has seen a spike in new Covid-19 cases and deaths since February.

The recent wave has brought hospitals in more than half of the South American nation’s 27 states to the brink of collapse and caused state governors to order more restrictions to slow the spread of the virus.

The country of 212 million people has lost nearly 280,000 people to the disease, second only to the United States.

Pazuello’s two predecessors in the post had fallen foul of Bolsonaro by questioning the lack of “scientific” guidance the president was taking to tackle the pandemic.

But Pazuello, an army general with no previous medical experience, took a military approach to his job, saying last October, “It’s that simple: one commands and the other obeys.”

Epidemiologist Mauro Sanchez of the University of Brasilia said the new minister will have the delicate task of trying to plot a “change of course” in the health policy in Brazil, which has become the global epicenter of the pandemic.

“Without controlling the pandemic and with the emergence of new mutations, Brazil is perceived as a threat,” Sanchez told AFP.

The fact that Queiroga is a doctor does not guarantee him success, he said, but in the current context, “it brings a certain reassurance to the population and gives him a certain legitimacy in office.”

Brazil is in the grip of a second wave of the pandemic, with more than 1,800 deaths per day on average, up from to 703 at the beginning of the year. That growth has been fueled by a new strain of the coronavirus that is at least twice as contagious as the original.