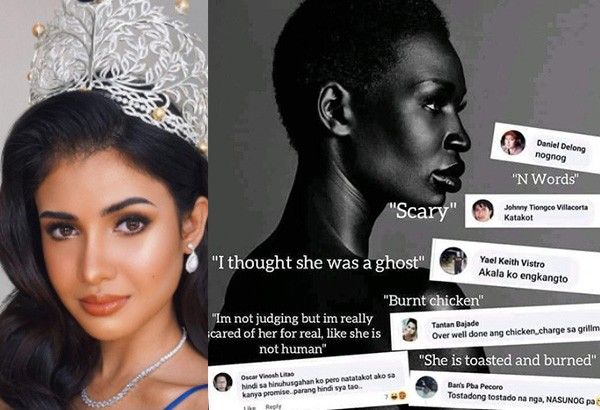 MANILA, Philippines — Just when we thought all the bashing took a lull, and netizens were actually posting good vibes, a handful of Filipino fans were, once again, embroiled in a word war on racism - this time with Canada's Nova Stevens.

On her social media account, Nova wrote, "Here we are again. I've been receiving this picture in my inbox a lot lately. With all that has been going on in the world, 'black lives matter.' Asians are humans, you would think this would bring us together. Instead, looks like some people are still stuck in their ignorant and racial ideologies. I'm really disappointed with some pageant fans from other countries. Your hate takes away the fun and enjoyment from this once-in-a-lifetime experience. Is it really that difficult to spread love instead of hate?

"No one is saying you HAVE to support all contestants, all we are saying is that you support your delegates without bringing others down. You don't need to dim someone's light in order for you to shine. The world is evolving, people are realising that beauty is not exclusive to one specific group of people. The definition of beauty applies to all, because beauty can be seen in different shapes, shades, and sizes. Please see the beauty that is in this world. We don't need to look the same, we just need to treat each other the same."

Rabiya apologized to Nova, in behalf of Pinoy pageant fans, and to Thailand's Amanda Obdam, whose supporters are constantly at odds with her supporters.

"It takes no time to be kind. I learned in this industry that people tend to be cruel. We should not normalize that aspect. When you see something is not right, you correct it. You have the power to do so. People are listening to you. That's why, I think this is also the best way for me to shine kindness and the spirit of being humble. So regardless of what type of competition we are in, I hope that the Filipinos will still be able to be respectful.

"I know that these hate comments is not the reflection of who we are as Filipinos, and what our country can offer. We are so much more than that. It's just that some people have normalized being cruel, especially in the industry of beauty pageants. We can support each other without destroying each other," implored the Ilongga beauty.

Meanwhile, the Miss Universe Philippines organization posted Rabiya's OOTD (outfit of the day) Look #10 featuring a blue and gold bodyhugger with a Grecian neckline and thigh baring hemline. The ensemble was decked with spiral diamond earrings and heeled slip-ons as footwear.

"A striking balance between modern and traditional fashion is challenging. But a successful integration of innovation and artistry will lend a sense of identity, class, and ingenuity," said fashion designer Lenie Canonaso on her creation for Rabiya.

Miss Universe 2011 runner-up and MUP national director, Shamcey Supsup-Lee told Rabiya, during an online interview that "I wasn't surprised when you won Miss Universe Philippines, and I won't be surprised if you took home the fifth Miss Universe crown. I have a good feeling about your journey. My advice now, once you enter into the competition, is don't think anymore of the trainings and the sessions, and enjoy the moment with fellow contestants because they go by so fast."

In The Heights takes a look at the American dream

Polio outbreak in Philippines declared over