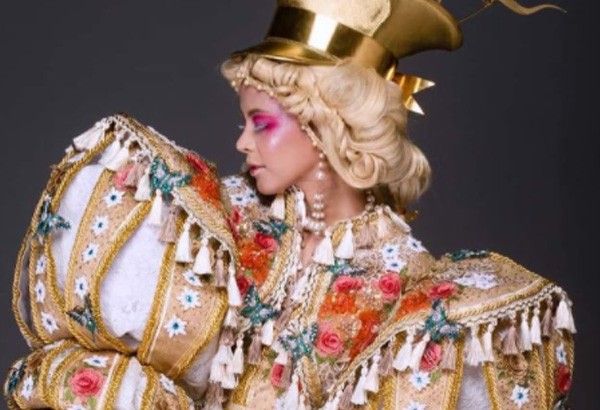 The costumes while depicting some historical, religious, or folkloric detail still managed to be wearable and made the girls look like stunning portraits coming to life.

With a few creations inspired from historical events or cuisine from a certain locality, it was good to see a majority of the candidates wearing varying versions of the terno or mestiza dress. It gave the impression that the designers who created the aforementioned costumes knew their history, and acknowledged the terno's undying imprint.

While we should welcome creativity, it should at times bow down to decorum and propriety. Leave the fantastical creations to other nations, let's stick to what's distinctly ours.

At the culmination of the National Costume presentation, ten candidates were picked out as standouts of the  challenge. These were:

Emmanuelle Vera of Taguig City who looked regal in a modern terno executed by Geronie Labora;

Natasha Jung of Tacloban City is the maiden of the reef in a Nick Guarino creation depicting Leyte's mariculture industry;

Asha Gutierrez in an ensemble mirroring the sustenance of the fishing sector in a banca and oar ensemble designed by Don Cristobal;

Shannon Manzano of Quezon City sizzled in a caped terno ensemble that camouflaged the warrior within as designed byEdwin Uy;

Cebu City's Tracy Maureen Perez paid homage to 500 years of Christianity in the Philippines. Her bolero and bustle ensemble by Axel Que approximated the garb of the "conquistadores" when they first set foot on the island of Mactan in 1521;

Ganiel Krishnan of Kawit, Cavite looked like a fairytale princess in a beautifully executed terno by Louis Pangilinan. Her fan shaped headdress and hand props made her look like a character from a fantaserye on primetime television.

But it was Anne Palmares who stole the show with a food-laden ensemble portraying the well loved batchoy of her hometown, Iloilo City, as created by Tata Blas Pinuela.

Since the announcement of the ten finalists was made before Dindi Pajares' crowning as Miss Supranational Philippines, the Bataan beauty also made it to the list. She looked resplendent in a stylized terno created by Rau Actaza.

The Miss World Philippines 2021 coronation night will unfold on August 8 at the Grand Ballroom of Okada Manila, the biggest integrated resort facility in the country. The final show will be beamed to a nationwide audience through GMA-7's rainbow network at 10:30 p.m.