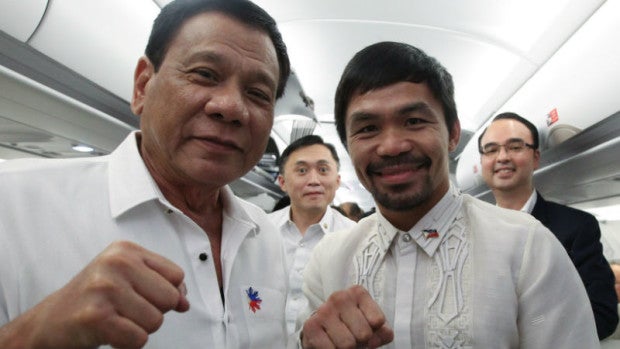 A few days later, the PDP-Laban, which is led by Pacquiao as president, released on social media a more complete video of the controversial interview and urged detractors and party mates to take a second look at what the senator from Saranggani said — this time in context.

Although Pacquiao has made it clear that the nation’s sovereignty is crucial, the video also reveals that the senator sided with Duterte against insinuations that the president’s notorious “jet ski” comment in the 2016 election campaign should be taken literally.

[Translation: “If he would really do it, then that’s literal. Would we allow him as president to ride a jet ski to that place?”]

In an interview, Deputy Speaker Arnie Teves of the 3rd District of Negros Oriental said Duterte and Pacquiao had always been close.

“I was made aware quite early of how close President Duterte and Senator Pacquiao have always been, even in the years prior to 2016,” said Teves. “So I was at first taken aback by headlines that made it seem like Manny had taken such a hardline stance against Duterte. I didn’t expect that at all.”

“But there’s a substantial difference between being sincere and being hostile,” he added. “Thankfully this video surfaced, as it brings an honest clarity to the situation in that Manny was not being antagonistic to the president in even the slightest, both in tone and in content. Senator Manny Pacquiao even defended the president at some point.”