World Vegan Month: How going vegan could boost your health 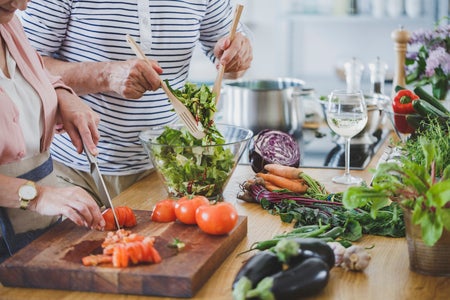 With Nov. 1 marking World Vegan Day and the start of World Vegan Month, we round up some recent studies which suggest that switching to a vegan diet could bring big health benefits.

A study published late last year found that patients with type 2 diabetes might be able to control the condition by following a plant-based diet or vegan diet. After looking at 433 diabetes sufferers, the researchers found that following a predominantly plant-based diet rich in fruits, vegetables, nuts, legumes and seeds with few animal products, or none at all (a vegan diet) could effectively reduce the risks associated with type 2 diabetes, boost weight loss and improve mental and cardiovascular health. Patients following a plant-based diet were also able to stop taking medical treatments or reduce their dosage.

A small-scale United States study published earlier this year suggests that a vegan diet could boost levels of the microbes in our gut which are related to improvements in body weight, body composition and blood sugar control. The study looked at 147 overweight participants and asked them to follow either their usual diet or a low-fat vegan diet for 16 weeks. The findings showed that the group that followed a vegan diet lost an average of 12.7868 pounds (5.8 kilograms), and showed a significant increase in insulin sensitivity. The number of beneficial gut bacteria also increased in the vegan group, and the changes were associated with decreases in body weight, fat mass and visceral fat.

A recent study found that following a vegan diet could increase satiety, which is the feeling of being full and satisfied after a meal. The small study looked at 60 male participants, including 20 with obesity, 20 with type 2 diabetes, and 20 who were healthy. It found that the men who ate a vegan meal with tofu showed an increase in beneficial gastrointestinal hormones involved in the regulation of glucose metabolism, insulin secretion, satiety and weight management after the meal, compared to after eating a non-vegan meal with meat and cheese. In addition, all men reported increased satiety after the vegan meal.

Eating a plant-based diet could help boost heart health, according to a study published this year in the Journal of the American Heart Association. Studying over 10,000 U.S. adults, researchers found that people who ate the most plant-based foods overall had a lower risk of having a cardiovascular disease such as heart attacks, stroke, heart failure and other conditions, a lower risk of dying from a cardiovascular disease and a 25% lower risk of dying from any cause, compared to those who ate the least amount of plant-based foods. Previous studies which have looked at more specific populations, such as such as vegetarians or Seventh Day Adventists who eat a mostly vegan diet also showed similar results. CL/JB