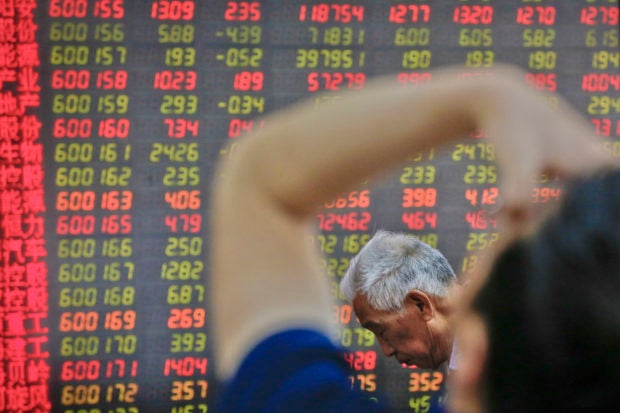 BANGKOK – Shares rebounded in Europe on Tuesday after logging moderate losses in Asia as China and the U.S. ratcheted up their tariffs battle.

The Dow Jones Industrial Average plunged more than 600 points on Monday and the benchmark S&P 500 index suffered its biggest loss since January.

Investors already rattled by mounting tensions between Beijing and Washington got an extra jolt when China announced late Monday that it was raising tariffs on $60 billion of imports from the United States in retaliation for the Trump administration’s latest hike in import taxes on Chinese exports.

“A clear hardening of attitudes, with state media blaring that China ‘will fight to the end,’ has stirred concerns of a protracted and widening trade war,” Mizuho Bank said in a commentary.

Still, since Beijing’s tariff increases only take effect on June 1 and those raised by Washington apply only to goods shipped after May 10, which will take a couple weeks or more to reach the U.S., there is still time available to find a compromise in the festering dispute over Chinese efforts to gain a lead in advanced technologies through means that the Trump administration says are unfair and violate world trade rules.

Hopes the world’s two largest economies were on track to resolve their dispute over trade and technology had helped push the market to its best yearly start in decades. But that has given way to concern that a full-blown trade war could crimp what is otherwise a mostly healthy economy.

Trade talks between the U.S. and China concluded Friday with no agreement and with the U.S. increasing import tariffs on $200 billion of Chinese goods to 25% from 10%. Officials also said they were preparing to expand tariffs to cover another $300 billion of goods.

Energy futures recovered, with U.S. crude gaining 29 cents to $61.33 per barrel in electronic trading on the New York Mercantile Exchange. It lost 62 cents or 1% to settle at $61.04 per barrel on Monday. Brent crude, the international standard, picked up 57 cents to $70.80 per barrel.