World shares extend losses ahead of US economic growth data 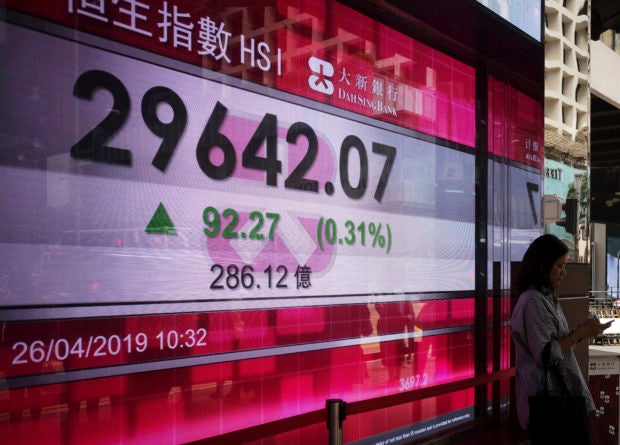 BANGKOK – Shares edged lower in Europe on Friday following a lackluster day in Asia ahead of the release of U.S. economic growth data later in the day.

Benchmarks fell Friday in Paris, London, Tokyo and Shanghai but rose in Hong Kong and Sydney.

Economists have been upgrading their estimates, with many forecasting that GDP expanded at an annual rate of close to 3% in the first three months of the year. That would be up a full percentage point from previous estimates.

In Asian trading, concern that China may temper its economic stimulus pulled benchmarks lower for a second straight day.

Shares fell in Taiwan, Singapore, Malaysia and Thailand but rose in Jakarta.

China-U.S. trade talks are again on the agenda, for next week in Beijing, with further talks in Washington slated for May 8.

President Donald Trump has said his Chinese counterpart, Xi Jinping, might be visiting the White House soon, but the timing remained unclear. Progress on a deal resolving a conflict over Beijing’s technology policies that has involved billions of dollars in tariffs being imposed on each other’s products would reassure investors who have been rattled by the uncertainty.

In the U.S., earnings reporting season is about a third of the way in, and investors are searching for clues about whether profit growth can accelerate later this year following a weak first quarter.

Analysts are forecasting a drop of 2.8% in earnings for S&amp;P 500 companies this time around, not as bad as the 4% decline they were expecting a few weeks ago.