Violinist plays during brain op as surgeons test her dexterity 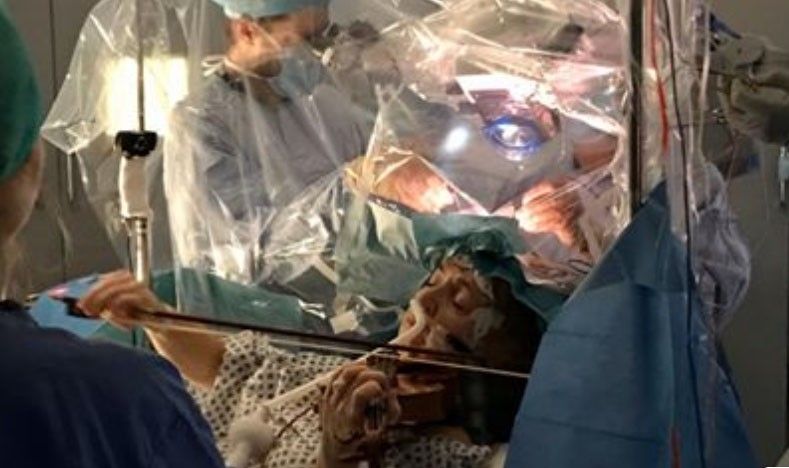 LONDON, United Kingdom — A violinist helped surgeons avoid damage to her brain during surgery to remove a tumour by playing her instrument, the UK hospital where she underwent the innovative procedure said.

Surgeons came up with the novel approach to ensure that areas of Dagmar Turner's brain responsible for intricate hand movements were not affected during the precision procedure.

Turner, a 53-year-old musician with the Isle of Wight Symphony Orchestra in southern England, was diagnosed in 2013 with a slow-growing tumour after suffering a seizure during a concert.

Professor Keyoumars Ashkan, consultant neurosurgeon at King's College Hospital in south London, hit on the plan to protect vital cells located in the right frontal lobe of her brain.

The area is close to the part of the brain that controls the micro-movements of the left hand required to regulate a violin's pitch and timbre.

The medical team proposed that Turner be woken up midway through the procedure so she could play and be monitored to make sure her coordination was not being affected.

Video footage of the operation showed Turner playing the violin as doctors monitored her movements on screens.

"We perform around 400 resections (tumour removals) each year, which often involves rousing patients to carry out language tests, but this was the first time I've had a patient play an instrument," Ashkan said in a hospital statement on Tuesday.

"We managed to remove over 90 percent of the tumour, including all the areas suspicious of aggressive activity, while retaining full function in her left hand," he added.

Turner said the "thought of losing my ability to play was heartbreaking".

"Ashkan... and the team at King's went out of their way to plan the operation –- from mapping my brain to planning the position I needed to be in to play.

Turner, who has a 13-year-son and has played the violin since the age of 10, underwent the procedure last month. She left the hospital three days after the surgery.

"Thanks to them I'm hoping to be back with my orchestra very soon."

What we know about the Lebanon explosions