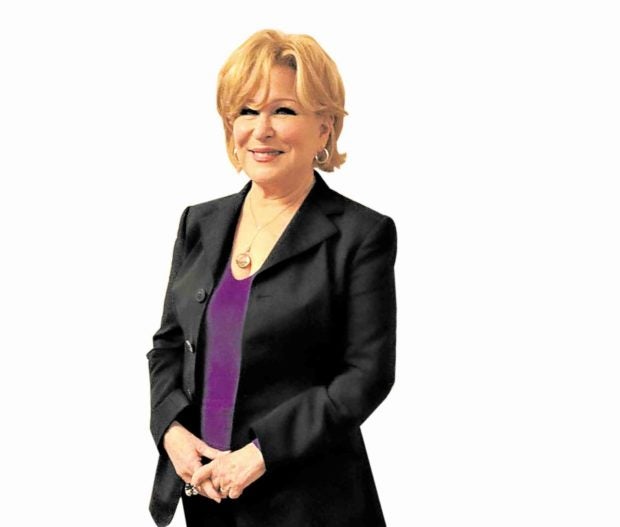 MANILA, Philippines — American actress Bette Midler should not be meddling in Philippine affairs.

Malacañang on Sunday slammed Midler, who is also a singer, comedian, and film producer, as an “incompetent” and “gullible talking head” after she counted Duterte as among the world’s detestable leaders, alongside the likes of Adolf Hitler and other dictators.

In a post on her Twitter account on Saturday, she aired her sentiments on the ongoing impeachment hearings against US President Donald Trump and why it should be of concern to Americans.

“For Americans who think the impeachment hearings have nothing to do with them, think again. Want to leave the door open to a Hitler? A Stalin? A Castro? A Duterte? A Pol Pot? A Putin? An Assad? A Chavez? A Kim Jong Un? A Mussolini? A Mugabe? An Amin? #Trump’s the gateway to that,” Midler wrote on Saturday.

It was not the first time that the actress, a critic of Trump, made unsavory remarks against Duterte.

In 2017, she called the President a “murderous dictator” who serenaded Trump during that year’s Association of Southeast Asian Nations summit’s gala dinner in Manila.

Presidential spokesperson Salvador Panelo noted that Midler, “based on her numerous tweets, is an outspoken critic of her government” and that she “has the right to criticize in her country as an exercise of her freedom of expression.”

However, “she should be circumspect as an influencer and should refrain from giving one-sided and judgmental comments on internal affairs of another sovereign state,” Panelo said.

He warned Midler against believing the “false narratives coming from the political opposition and some biased media outlets whose agenda is to besmirch the President and his administration before the global stage.”

He also suggested that Midler reflect and revisit “From a Distance,” a song written by American singer and songwriter Julie Gold, which Midler recorded in 1990 for her album.

“We suggest that she revisits her famous song From A Distance and learn from its lyrics that she may look at a foreign leader of a distant country with a positive outlook,” Panelo said.