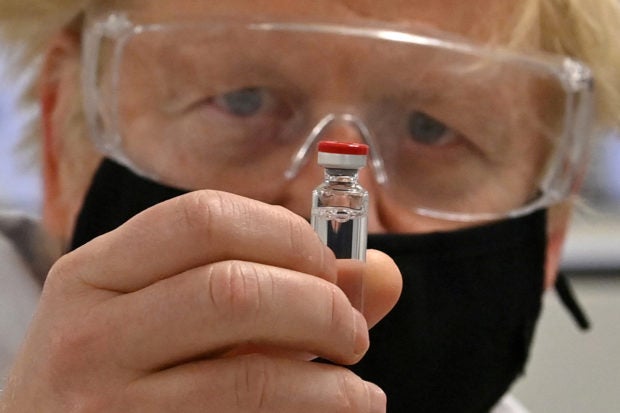 New Year’s Eve marks one year since the World Health Organization first mentioned a mysterious pneumonia in China later identified as Covid-19, which went on in 2020 to kill more than 1.79 million people and devastate the global economy in unprecedented ways.

But international efforts helped develop vaccines in record time, and following Pfizer-BioNTech and Moderna, the candidate developed by Oxford and drug firm AstraZeneca became the third to win approval in the Western world.

Britain, hard hit by a worrisome new strain of the virus and now divorced from the European Union due to Brexit, again gave its green light first.

“We will now move to vaccinate as many people as quickly as possible,” tweeted British Prime Minister Boris Johnson.

Unlike the Pfizer-BioNTech and Moderna vaccines, the one from AstraZeneca and Oxford does not need to be stored at very low temperatures.

It can be kept, transported and handled in normal refrigerated conditions, making it easier and cheaper to administer, which is particularly important for less wealthy nations.

Hours later, Argentina became the second nation to approve the vaccine. It and Mexico have agreements to distribute the vaccine in Latin America.

But the United States and European Union indicated that they would not soon follow suit.

He did not fault Britain’s health agency but said the United States was following its own trials and evaluations.

He also voiced hope that Johnson & Johnson’s Janssen vaccine — which, in contrast to initially approved jabs, requires just one dose — could be ready for approval in the United States in the first half of February.

Russia and China also claim to have developed Covid-19 vaccines, and have already started administering them.

Chinese pharma giant Sinopharm on Wednesday said Phase 3 trials of its candidate had shown 79 percent effectiveness, short of the more than 90 percent achieved by Pfizer-BioNTech and Moderna. The firm has applied to China’s drug regulator for approval.

But Beijing has struggled to gain international trust for its vaccines, hindered by a lack of data transparency as well as criticism over its handling of the initial outbreak of the virus in the central Chinese city of Wuhan.

Earlier this week, a Chinese court handed a four-year prison term to a citizen journalist who provided rare unvarnished reports from Wuhan of the early days of the pandemic.

A new official Chinese study said that infections in Wuhan may have been 10 times higher than official figures suggest.

China’s Centre for Disease Control found that 4.4 percent of the city’s 11 million people had developed antibodies against the virus causing Covid-19 by April — meaning around 480,000 infections, far above the official tally of 50,000 cases to date.

Even as vaccinations ramp up in Europe and North America, global infections have surged to 82 million, with nearly 1.8 million deaths.

Germany, which had handled the first coronavirus wave relatively well, has been hit hard by the second.

It logged more than 1,000 daily deaths for the first time, authorities said Wednesday, as Chancellor Angela Merkel warned that the country’s “difficult times” were going to last “for a good while yet.”

Germany is under a partial lockdown, with most shops closed along with schools, restaurants, cultural and leisure facilities.

But with Merkel due to meet senior politicians to discuss the situation next Tuesday, some are already pressing to extend the existing lockdown beyond the current January 10 end-date.

Health Minister Jens Spahn told German broadcaster ARD the country was “nowhere near where we need to be” and “there will undoubtedly be measures” after January 10.

Experts believe the new variant could be more contagious, contributing to record daily caseloads in England and sparking fear as it quickly proliferates.

Indian authorities were trying Wednesday to track down tens of thousands of recent arrivals from Britain as cases of the new variant more than doubled in 24 hours.

California became the second US state to detect the variant — after Colorado — with a 30-year-old San Diego man testing positive.

Top US government scientist Anthony Fauci said he was “not surprised” by the variant’s spread and warned the nation “likely will be seeing reports from other states.”

Ireland also announced the tightening of coronavirus restrictions for at least a month including the closing of non-essential retail and gyms.

“We will do what we need to do to suppress the virus,” Prime Minister Micheal Martin said in a televised address. “It is now growing exponentially.”

Resorts World Manila prepares for a Digital 2021 with Globe 5G

Vote for women — they may be more likely to keep campaign promises, says study

Nature not healing as pollution returns with economic activity

What Happened to the Last Sultan of Sulu?