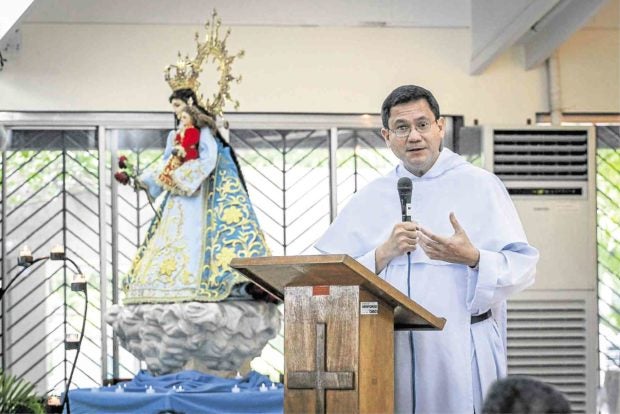 Timoner, now the first Asian Master of the Dominican Order, was elected on Saturday in Bien Hoa in Vietnam where Dominicans from more than 80 countries are holding their general chapter or world conference until Aug. 4.

Timoner will succeed the Very Rev. Bruno Cadore, a French physician and bioethicist who has been serving as OP Master since 2010.

An OP Master is elected to a nine-year term without reelection.

With his election, Timoner becomes the 88th successor of  St. Dominic de Guzman, the Spaniard who founded the mendicant friar movement with the Italian St. Francis of Assisi in the 13th century.

Together, the Dominicans and Franciscans helped reform the Church.

During the Age of Conquest in the 15th and 16th centuries, the two friar-orders were among the first missionaries to evangelize the “New World,” such as the Americas and, eventually, the Philippines.

Timoner is Cadore’s socius or assistant for the Asia-Pacific and has been based in Santa Sabina church, the Dominican curia in the Aventine Hills in Rome, since 2017.

Since 2014, Timoner has also been the lone Philippine member of the International Theological Commission (ITC), an advisory body to Pope Francis.

He earned his philosophy degree at the Philippine Dominican Center of Institutional Studies in Santo Domingo Church in Quezon City in 1991,  and his theology degree at the University of Santo Tomas (UST) in 1994.

He obtained his Licentiate in Sacred Theology and Master’s in Intercultural Theology from the Catholic University of Nijmengen in the Netherlands in 2004.

In Nijmengen, Timoner met Fr. Edward Schillebeeckx (1914-2009), the controversial Belgian Dominican who dominated theological thought in the last quarter of the 20th century.

After his ordination, Timoner was assigned to UST, where he served several posts, including rector of the UST Central Seminary.

In 2012, he was elected prior provincial of the Philippine Dominican Province.

He will also be the father of the “Dominican family” of active sisters, contemplative nuns, tertiary order of laymen and clerical fraternities numbering in the thousands.

In Vietnam alone, the Dominican lay order has at least 40,000 members.

In the Philippines, Dominican friars run UST, Asia’s oldest university, and Letran College, which will mark its 400th anniversary next year.

Founded during the medieval ages, the Dominicans saw the rise of universities in Europe and often occupied influential academic chairs.

Because of their intellectual stress on “contemplation and sharing the fruits of contemplation,” Dominicans became known for their learning and scholarship.

During the Age of Conquest, Dominicans defended the conquered natives from the excesses of colonization, such as Fray Bartolome de las Casas in the Americas and Bishop Domingo Salazar of Manila.

In the 20th century, the Belgian Dominican Fr. Dominique Pire was given the Nobel Peace Prize in 1958 for his work with refugees.

Polish Pope now Saint John Paul II, who helped end the Cold War and was instrumental in the collapse of the Soviet Union and communism, was a product of the Dominican pontifical academy in Rome, the Angelicum.