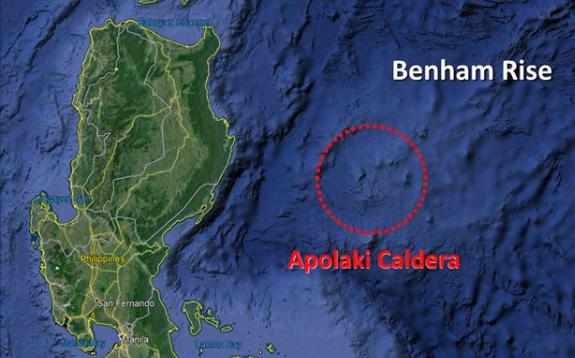 MANILA, Philippines — The world’s largest caldera could be in the Philippine Rise (Benham Rise), according to a Filipina marine geophysicist.

It was among the discoveries of New Zealand-based scientist Jenny Anne Barretto in her recently published study on the morphology and formation of the Benham Rise, the University of the Philippines Marine Science Institute Geological Oceanography Laboratory in a Facebook post on Monday.

Her study — called “Benham Rise unveiled: Morphology and structure of an Eocene large igneous province in the West Philippine Basin” — was made available online on Sunday.

THE WORLD';S LARGEST CALDERA IS IN THE PHILIPPINESJenny Anne Barretto, a Filipina marine geophysicist based in New…

Posted by UP MSI Geological Oceanography Laboratory on Sunday, October 20, 2019

The Apolaki Caldera may be the world’s largest known caldera with its diameter of 150 kilometers, the UP MSI said. A caldera is a large volcanic crater formed by a major eruption.

Apolaki is translated as “giant lord,” named after the Filipino mythical god of the sun and war.

The Philippine Rise is a 13-million-hectare undersea plateau off Aurora and Isabela provinces, on the northeastern side of the Philippine archipelago.

The United Nations Commission on the Limits of the Continental Shelf recognized the area in 2012 as part of the country’s continental shelf.