Peralta to act on cases of unjustly detained quarantine violators 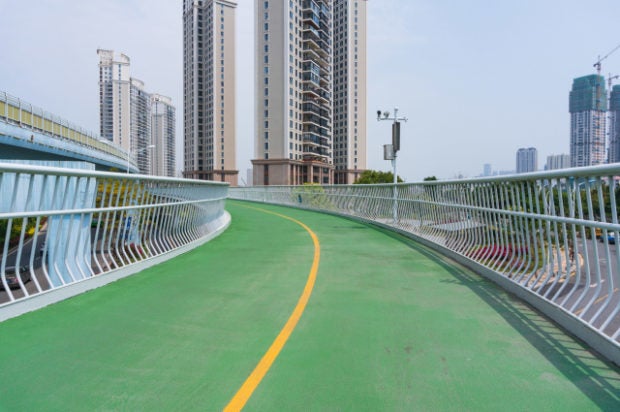 Asia is home to a host of innovations for cyclists, among them raised cycle lanes, artificial intelligence to regulate traffic, buildings designed with cyclists in mind, and robotic underground parking lots. This is ground-breaking infrastructure, which should inspire bicycling enthusiasts and planners from elsewhere in the world.

Cycle lanes that are safe and environmentally friendly

Not surprisingly some of the most spectacular cycling innovations have been pioneered in China, notably the country’s off-road cycle lanes.

The Middle Kingdom did not wait for the pandemic to develop its biking infrastructure, particularly in cities faced with the challenges of reducing automobile traffic and the burden on public transport.

To achieve these goals, urban planners have promoted cycling by building networks of particularly innovative cycle lanes. This is notably the case in Xiamen, which is home to the “Bicycle Skyway”, a remarkable elevated cycle lane that hovers 17 feet over the city’s gridlock. Completed in 2017, the structure, which is nearly five miles long, can accommodate more than two thousand bikes at a time.

Not to be outdone, Beijing has also built its own bicycle highway. Inaugurated in 2019, the purpose-built cycling artery extends over four miles and is also elevated in places. Major investment in infrastructure for bikes is the norm in China, and notably in the province of Zhejiang alone, where the network of green cycle lanes will cover more than 10,000 kilometers by 2022.

Artificial intelligence to respond to demand for bikes

To cope with growing demand in big cities, bike rental services are increasingly using big data and artificial intelligence to regulate traffic. The idea is to optimize the location of machines for rent so that they can be easily found in neighborhoods where they are needed instead of taking up space in areas where they will not be used. These initiatives also allow for the management of peaks in usage during rush hour in real time.

In Taiwan, cycling is also enjoying a major upsurge in popularity. Not only does the country benefit from an extensive network of cycle lanes, hotels and other businesses have also invested in projects to ensure ideal conditions for cyclists. Riders in the country can even take advantage of special restrooms, where they can bring their bikes inside so as to avoid any risk of theft.

Japan is remarkable for the creative solution it has developed to park bicycles. In cities where the cost of real estate is prohibitive and public space is at a premium, planners have built enormous underground bike parks that are fully robotized. When using these facilities, cyclists place their bikes in an automatic elevator that delivers them to the robot, which then stores them in a specific location underground. When they wish to recover their machines, cyclists simply swipe their account ID and the robot returns the correct bike, which is identified by a chip attached to its front fork, to the surface. These parking facilities have the capacity to store several hundred bicycles, which saves a lot of space above ground. They also allow riders to store their machines with full confidence that they will not be stolen.

All of these initiatives can and should provide inspiration for other cities around the world, where cycling infrastructure is less well developed. NVG

New lockdowns from China to Europe as virus trials stumble

PH envoy to China: About 100 Pinoys in Beijing want repatriation

Eleazar to police commanders: Work with mall owners for rules during sale events

Nurmagomedov can be greatest of all time, says UFC's White

Black counting on Newsome to deliver on both ends for Bolts