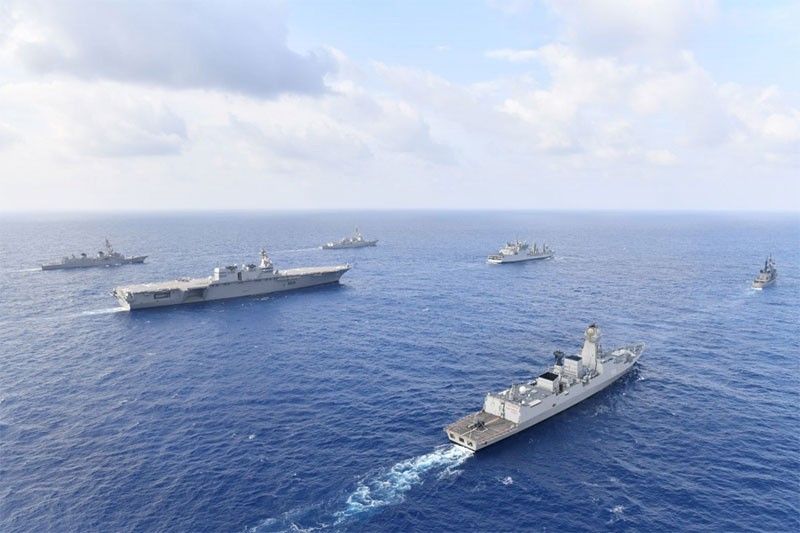 MANILA, Philippines — The Philippines will no longer be participating in joint maritime exercises in the South China Sea with other countries, Defense Secretary Delfin Lorenzana said Monday.

According to Lorenzana, President Rodrigo Duterte issued this directive to reduce tension in the contested waterway.

"President Rodrigo Duterte has a standing order to us, to me, that we should not involve ourselves in naval exercises in the South China Sea except our national waters, the 12 mile distance from our shores," Lorenzana said at an online press briefing.

Just last month, the United States declared that it would treat China's pursuit of resources in the South China Sea as illegal. Beijing rejected this, claiming that the accusation was "unjustified."

The US, along with allies such as Australia, has been recently conducting joint maritime exercises in the South China Sea following its latest policy on the maritime disputes.

"If one country’s action is considered as belligerent, another tension will normally rise, so I hope that all the parties in this exercise will have, will work on their actions there, to exercise prudence and carefulness so that there will be no miscalculations that could further increase the tension," the defense chief said.

Duterte: I am 'inutil'

The president, once again, insisted that asserting the Philippines' sovereign rights over the West Philippine Sea would entail going to war with China.

"China is claiming it, we are claiming it. China has the arms. We do not have it. So, it's simple as that," Duterte said.

Instead of supposedly going to war, Duterte said the issue should be treated "with a diplomatic endeavor."

"They (China) are in possession of the property, so what we can do? We have to go to war and I cannot afford it. Maybe some president can but we cannot. Inutil ako d'yan," the president said.

This, despite the Philippines' July 2016 arbitral win that invalidated China's historic nine-dash line claim over the South China Sea. Beijing continues reject the ruling while Manila, under the Duterte administration, refuses to invoke the award.

In response to Duterte's remarks, retired Supreme Court Senior Associate Justice Antonio Carpio said the president should not say that China is in possession of the Philippines' exclusive economic zone in the West Philippine Sea because this is not the case.

"China does not possess Philippine EEZ which is  beyond the 12-nautical mile territorial seas of disputed islands or high-tide geologic features," Carpio said in a statement.

Carpio, part of the Philippine delegation in the South China Sea arbitration, stressed that naval power like the US, the UK, France, Australia, Japan and Canada regularly sail in the West Philippine Sea, proving that Beijing is not in possession of the area.

He also pointed out that Vietnam, Malaysia and Indonesia are asserting their sovereign rights to their maritime zones against China's claims without going to war.

US closes in on 200,000 virus deaths, weeks before election

Cooperate on climate or 'we will be doomed' — UN chief