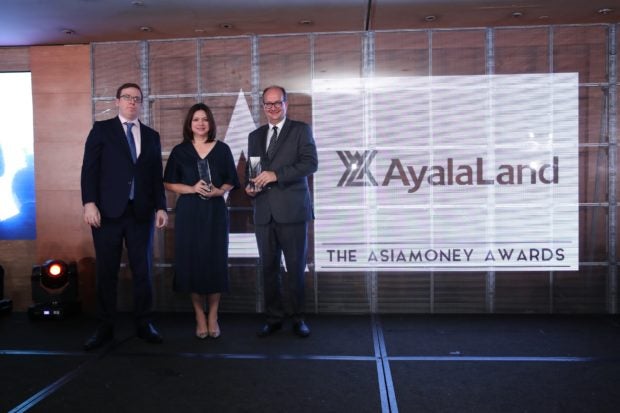 Ayala Land, Inc. (ALI) was recognized by Asiamoney as the country’s top company of the 2010’s, along with its parent company Ayala Corporation — having won the most number of awards in this decade in Asiamoney’s corporate-related polls.

Asiamoney, a division of leading business and finance publication Euromoney,  accorded the special recognition in celebration of its 30th anniversary. It also cited ALI as the Most Outstanding Company in the Philippines for the Real Estate Sector in its Asia’s Outstanding Companies Poll 2019.

Furthermore, at the 15th Annual Euromoney Real Estate Survey, ALI has once again been named the Philippines’ best developer. They ranked first in its Residential, Retail/Shopping, Office/Business and Innovative Green Development Sector categories, with the company also receiving the Overall category award.

The Euromoney rankings are a result of a global real estate markets poll wherein the opinions of leading firms involved in the real estate sector worldwide are canvassed.  Over 3,000 respondents, including advisers, developers, investment managers, banks and corporate end-users of real estate, identify which firms they believe have been the best providers of real estate products and services in their market during the past 12 months.

Ayala Land has received a number of awards from Euromoney and Asiamoney through the years, the most recent of which was the Asiamoney Most Outstanding Company in the Real Estate Sector award for both the Philippines and Southeast Asia in 2018.  Asiamoney also named ALI the Best Corporate Brand in the Philippines in 2017, while Euromoney recognized it as the Overall Best Property Developer, among other real estate and finance citations, in 2016.