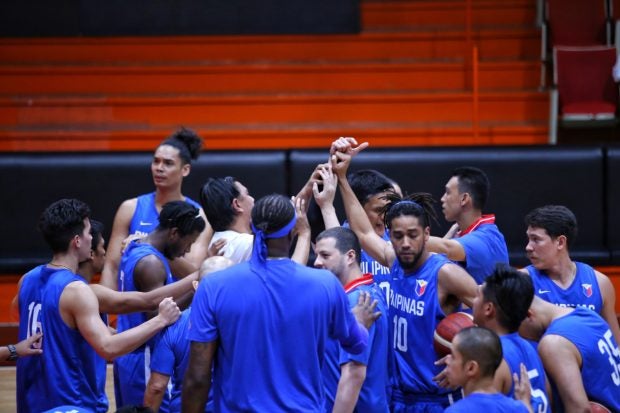 MANILA, Philippines—The 2019 Fiba Basketball World Cup is a fortnight away and Gilas Pilipinas has yet to get a full attendance in its daily practices.

Gilas had 12 players in attendance on Thursday at Meralco Gym but missed June Mar Fajardo, the injured Marcio Lassiter, Roger Pogoy, and Troy Rosario who are in the thick of things in the finals of the PBA Commissioner’s Cup.

Gilas head coach Yeng Guiao said the absent players are already shoo-ins to the final roster, but the problem with the absences so close to the tournament is going to be the chemistry issue.

“My problem now is trying to jell them with only a week to go after the Finals,” said Guiao. “That’s really the problem.”

“These 12 here already have the cohesion and even if the three (Lassiter hasn’t participated because of his injury) join us, it’s obvious that their concentration is on what they’re doing and not with Gilas.”

Gilas traveled to Spain to play in a pocket tournament against Congo, Ivory Coast, and Spain but fielded just 10 players since Kiefer Ravena is still serving his Fiba-imposed suspension and Raymond Almazan’s visa was denied.

Fajardo, Lassiter, Pogoy, and Rosario were still with their club teams during the Spanish trip.

Guiao expects his team to be at full strength next week with the Commissioner’s Cup about to end on Sunday at the latest or on Friday at the earliest.

The mentor, however, won’t expect the players who played in the Finals to be in tiptop shape after a grueling series.

“It’ll take a few days so of course, if you’re the champion or lost in the series, there’s going to be emotional toll,” said Guiao. “When you get back here, you’re going to need some physical and mental break.”

“It’d be a short period, let’s just hope that they won’t need a long time adjusting but we know what they’re going through and it’s a difficult time but at the same time it’s exciting. All of those will have a toll on their focus and concentration.”