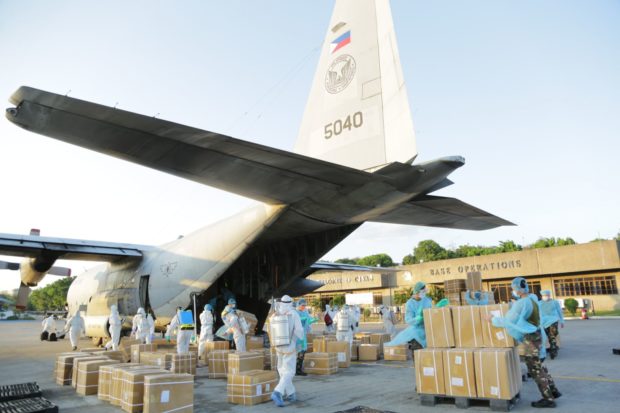 MANILA, Philippines—The Philippine Air Force will fly twice a day to Xiamen, China to speed up the transport of personal protective equipment that the Philippines bought for P1.8 billion.

Carlito Galvez Jr., National Plan Against COVID-19 chief enforcer, said at a press briefing on Tuesday (April 21) that the PAF would now fly twice daily to China to increase hauling capacity for PPE and to “have stockpiling of PPE and have a strategic reserve.”

The Philippine government had purchased 1 million PPE sets worth P1.8 billion from China to support health workers and those on the frontline of the battle against COVID-19.

But bringing home the medical gear had become a herculean task for the Philippine government.

Health Secretary Franciso Duque III earlier said that a single C-130 flight can carry up to 15,000 sets only.

Aside from C-130 flights, the Philippine government has also tapped Philippine Airlines and Cebu Pacific to help bring home the PPE sets from China.

The Philippine Navy’s BRP Bacolod City (LS-550) left for Xiamen on Tuesday morning to pick up a batch of the medical gear. It is expected to return in one week.

Sarah talks about the positive side of home quarantine