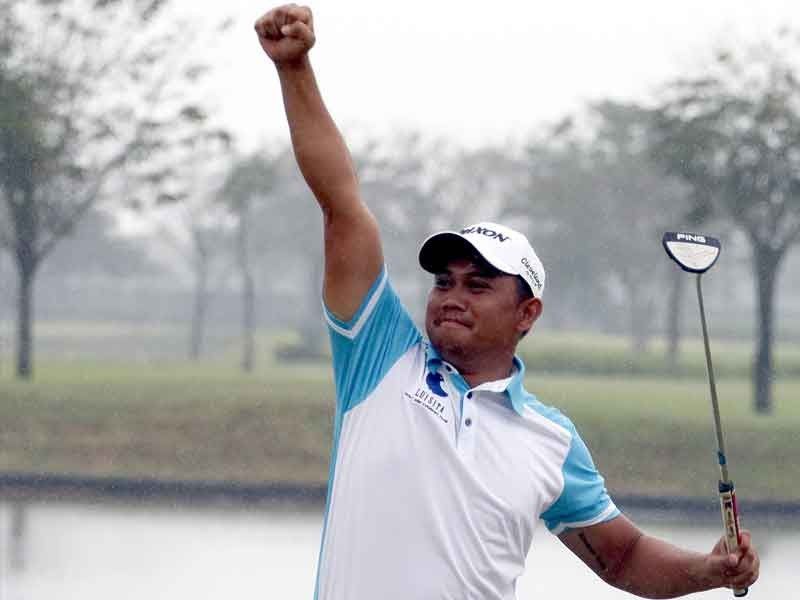 LUBAO, Pampanga – Slumping his stocky frame into a rattan chair at the sprawling Pradera Verde clubhouse, Clyde Mondilla kept downplaying his playoff chances, anxious more of the odds of him making it to his flight back home to Del Monte.

“Can I make it to the airport by 9 p.m.?” the reigning Philippine Open champ asked while waiting for the last four flights to come in, his four-under 284 aggregate off a day-best 67 keeping him tied with four others at the helm.

But after beating four others in the most crowded playoff cast in both the three-year-old Philippine Golf Tour Asia and decade-long PGT circuits in the ICTSI Pradera Verde Classic in a rain-drenched finale here Friday, the 26-year-old power hitter could well afford to spend the night somewhere here or in Metro Manila and book a new flight.

“I’ll still go,” said Mondilla, now grinning and thrilled over his feat worth $17,500 and the chance to make it back home in time.

But it didn’t come easy for the Del Monte star,  who had to agonizingly wait for quite some time before getting a stab at a second PGTA championship following his victory at Wack Wack in the inaugurals of the region’s emerging circuit’s inaugurals in 2017.

And in a duel of the best, he came out better and nipped Tony Lascuña with a birdie from practically the same spot on the second playoff hole (No. 9) to rule the hotly contested $100,000 championship.

Knox, who blew a three-stroke lead in the stretch and wound up with a 71, dumped his third shot into the frontside bunker and blasted past the hole, Zaragosa, who bucked overwhelming odds to complete a four-straight 71, putted from near the fringe and missed his birdie try and Nakajima, who stormed ahead with Spain’s Marcos Pastor with a solid 67 Thursday, apparently cracked under pressure and missed an eight-footer after Mondilla buried his from 12 feet.

Lascuña hit a solid approach shot and tap-in for birdie.

But a confident Mondilla proved steadier in the end, rolling in a pressure-packed putt from 10 feet then watching Lascuña flub his own bid from eight feet.

“I knew I have the edge on No. 9,” said the power-hitting Mondilla of the 600-yard hole, which he also birdied in regulation after missing an eagle try from 15 feet. “I was actually a bit confident in the playoff.”

The victory capped an astounding comeback for the former amateur hotshot who has now won three and lost one in playoff matches. He rallied from five down in joint 13th after 54 holes and snatched the win that was more of a triumph of the spirit for a player whose game went on a downswing after ruling the wild Philippine Open at The Country Club last year.

It was a sorry setback for Lascuña, who had looked forward to formalizing his claim on the PGTA OOM diadem but missed a potential clincher in regulation when his downhill, side-hiller putt on the 18th went past the cup.

“That’s golf. I could’ve extended it (playoff) but came up short in the end,” said Lascuna.

Mondilla never thought of figuring in such a classic ending as he bogeyed No. 2 to reel farther back in the early going of the final round in overcast skies. But he birdied the next then gunned down birdies on Nos. 5, 9, 12, 13 and 17 to fire a 67, the best in another unpredictable day.

Lascuna, just a stroke of third round co-leaders Nakajima and Pastor, also fell further behind with two bogeys in the first three holes. But like Mondilla, he struck back with three birdies in the last nine to save a 71.

Nakajima also dropped off the leaderboard with a rollercoaster two-birdie, three-bogey round after 16 holes. But the 35-year-old one-time PGT leg winner at Wack Wack birdied the tough par-4 17th to salvage a 72.

Zaragosa proved to be the event’s biggest surprise as the rookie pro, a shade under five feet, stood tall with a big fightback from a two-over card, birdying three of the last 11 to turn in his fourth straight 71.

Knox actually headed to a rousing finish after storming to a three-stroke lead over six rivals on back-to-back birdies from No. 12 but lost his momentum and touch on the sleek surface of Pradera, three-putting Nos. 15 and 16 and paving the way for the most crowded playoff cast in the three-year PGTA and decade-long PGT circuits.

Through all the final round skirmishes and shocks, Pastor failed to recover from three bogeys in the first 12 holes and tumbled down from joint first to a share of ninth at 287 with a 75. Other one-under par scorers were Ira Alido and second day co-leader Keanu Jahns, who closed out with identical 73s.

Aussie Jack Lane-Weston, one of the four leaders in the first round, battled back with a 69 to snatch solo sixth at 285, while Jhonnel Ababa blew his late bid for a record third straight championship in the event he ruled with back-to-back 10-under totals with a bogey on No. 14. He ended up with a 71 for joint seventh at 286 with Dutch Guido Van der Valk, who also turned in a one-under card for the day.

For results and other details, visit www.pgt.ph or follow the circuit, put up by ICTSI and organized by Pilipinas Golf Tournaments, Inc. with PLDT Enterprise, Meralco, BDO and PGT Asia official apparel Pin High as chief backers, on facebook.com/pgt.ph.

Jasmine adapts to working on set under 'new normal'