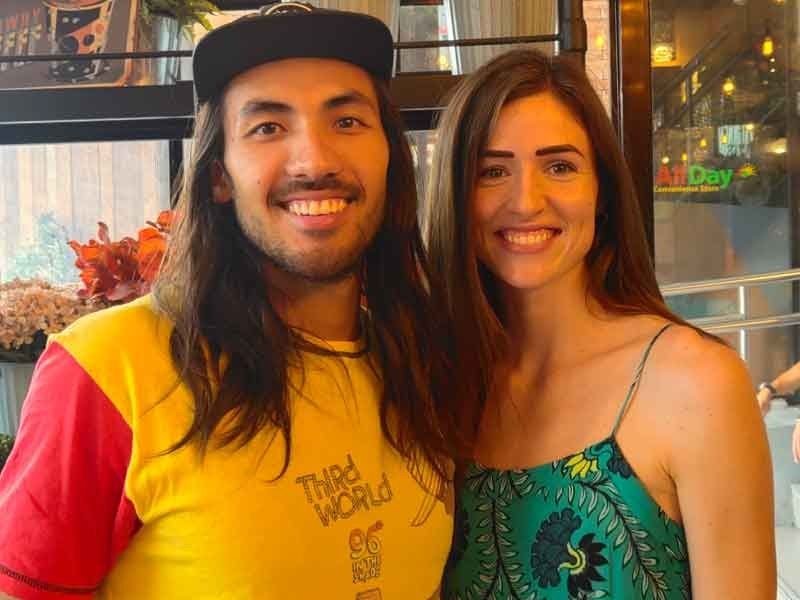 MANILA, Philippines – At first glance, you’d think that Jordan and Lauren Heading look out of place inside the quiet confines of a coffee shop along Katipunan Avenue.

Both stand at 6’2” so they stand out. Jordan, with his long hair and Jamaican reggae-themed shirt, looks like he’d be quite at home on the beach or in a reggae dance hall. His wife, Lauren (they have been married for a bit over four months now), looks like she’s ready to jump out a gym.

“Actually, I love the beach,” bared Jordan with a huge smile. “And I can play a ukulele too.”

“Jordan’s mother (Salvacion, who was in Manila for a few weeks) played the tour guide for us and had us riding jeepneys, tricycles and tasting the local fare,” shared Lauren. “We can’t wait to see more.”

Filipino sports fans will be seeing more of this couple soon.

Jordan recently signed up for Jimmy Alapag’s Alab Pilipinas squad while Lauren is in the process of deciding which Premier Volleyball League squad she should sign up with (there are three vying for the services of this Division II All-American volleyball player. In the midst of all these, they are getting acclimated to the sights and sounds of their new home.

Jordan was born in Adelaide to an Australian father, Tim, and a Filipino mother. He played for Batang Gilas under Olsen Racela in the 2011 FIBA Under-16 Championships in Vietnam that finished fourth. Among his teammates then were Isaac Go, Andrei Caracut and Hubert Cani, who are all in their final playing year in college basketball.

Lauren hails from Seattle, Washington. Both went to school at California Baptist University in Riverside, California, where they met. Jordan took up Kinesiology while Lauren took up Graphic Design. They both starred for their respective teams, with Jordan being the CBU Lancers’ starting point guard — also named as a member of the Academic All-Pacific West five team — while Lauren playing outside hitter and being a beast on both ends of the court.

“It was a learning experience. I had no expectations because you don’t hear a lot. You don’t get feedback about playing pro volleyball or the lifestyle. It was lower level volleyball that placed a lot of pressure on me. In the US we play like 35-40 games in three months. In Europe, we played 28 games in nine months. The plus side, is I got to travel to Paris, Amsterdam, and places like that. It was a great experience. Now here in the Philippines, it will be another.”

After Jordan’s Batang Gilas stint, he always knew that he would return to the Philippines someday.

“When I played for Batang Gilas in 2011, I enjoyed my time here so much and I wanted to come back and play. I wasn’t sure when but it was always in the cards. Some doors closed and others opened, so here I am.”

In Alab, he will rejoin his old Batang Gilas teammate, Caracut. “I am really looking forward this new phase in my career.”

“We both do,” chimed in Jordan.

The two then walked out into the hot and humid Friday morning along traffic-ridden Katipunan Avenue.

It’s all part of getting acclimated to their new home.