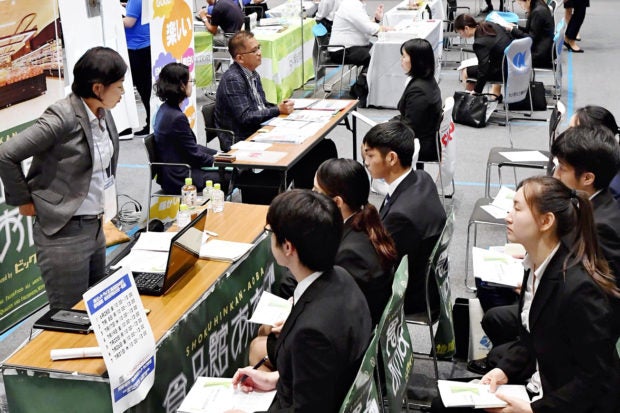 TOKYO — Japanese companies have accelerated a structural shift in traditional employment practices, as more and more major firms are raising the wage levels of young staff while trying to reduce the number of middle-aged and elderly employees by encouraging them to resign before the mandatory retirement age.

The trend is aimed at changing companies’ personnel structure so as to overcome fierce global competition and cope with changes in the industrial framework.

However, Japanese companies must reform their work practices, which are said to be less efficient than those in the United States and Europe. They have only partly achieved this.

A joint information session aimed at university seniors was held in Yokohama on July 6. One of the participating companies, a service firm, put up a sign reading, “You will start with a [monthly] salary of about ¥250,000.”

Companies, especially major ones, have raised their initial salary offerings one after another this year, touting the paychecks they provide as being as high as those of foreign-capitalized companies.

Fast Retailing Co. will raise its starting monthly salary by about 20 percent to ¥255,000 next spring. The operator of Uniqlo is even considering changing its personnel system to focus on the appointment of young executives and allowing third-year employees to earn more than ¥10 million annually.

Sony Corp. has also decided to introduce a new wage system that will increase the annual income of new employees from the current about ¥6 million to a maximum of about ¥7.3 million, on condition they have advanced specialist knowledge. The system is aimed at securing human resources capable of working in the development of artificial intelligence and other such areas.

According to the Health, Labor and Welfare Ministry, the average starting salary for university graduates has increased for five consecutive years, reaching ¥206,700 per month in 2018, up nearly ¥10,000 from that 10 years ago.

At the same time, a conspicuous number of companies, mainly in the electronics and pharmaceutical industries, are offering voluntary retirement to middle-aged and elderly employees.

According to Tokyo Shoko Research Ltd., 17 major companies offered their employees voluntary retirement from January to June this year, exceeding the 12 that did so in the entire previous year.

Fujitsu Ltd. offered voluntary retirement for which 2,850 employees applied. Astellas Pharma Inc. had about 700 people apply for voluntary retirement, exceeding the number originally sought at 600, even though it posted a record-high profit in the fiscal year ended in March 2019.

Despite a shortage of workers, companies are offering voluntary retirement to rebuild their businesses and their internal personnel structure. These personnel cuts are different from those made after the collapse of the bubble economy and the fall of U.S. investment bank Lehman Brothers in 2008.

Chugai Pharmaceutical Co. announced the voluntary retirement of 172 employees in April this year, despite its record sales for the year ending in December 2018. The reason is that “the business environment has dramatically changed; for example, developing new drugs requires experts in artificial intelligence,” an official at the company said.

In response to such moves, an increasing number of middle-aged and elderly people have decided to leave their companies.

A man in his 50s who was in charge of financial affairs at a major electrical appliance maker moved this spring to a start-up involving information technology. He said the company had been seeking a financial expert for a future initial public offering.

“I have a sense of fulfillment in the workplace where I can make use of my own experience,” the man said.

The job-changing market is energetic these days. According to a survey by Recruit Career Co., a job-information provider, the number of employees aged 40 and above who changed jobs in 2018 was 4.7 times the level in 2009.

“Amid changes in the business structure of companies, a growing number of employees are taking new jobs or moving to new industries,” said Kaoru Fujii, chief editor of the company.

“If companies dial back the system of hiring new graduates and retiring employees, it will be necessary to consider what should be done in the future to develop the human resources they’ve been in charge of until now,” said Hisashi Yamada, senior economist at Japan Research Institute.