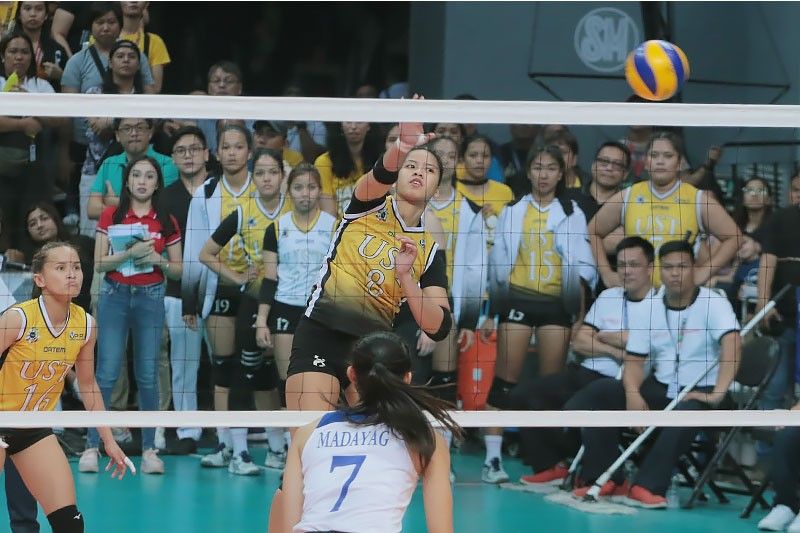 MANILA, Philippines — A lot can be said about UAAP Season 81 Rookie of the Year Eya Laure, but nothing rings truer than her huge heart.

Not even an ankle injury could stop the Espana-based volleybelle from doing whatever it takes for her UST squad.

Laure went down with an injury after an awkward fall at the beginning of the third set in Game Two of their UAAP women's volleyball finals series against Ateneo.

She was brought to the locker room after the fall but hurried her way back to the match before the set ended.

Laure's return was met with roars of cheers from both the UST and Ateneo fans in the arena.

While she struggled to get anything going on the offense after her return, her determination to finish the game was on full display.

"Gusto ko bumalik agad kaso hindi kaya ng paa ko," Laure said on what was going through her mind after her injury.

When Laure returned to the court after her injury, it seemed like a case for deja vu for UST fans.

The show of heart was achingly similar to when Laure's older sister, EJ, also played through pain in a crucial match against the NU Lady Bulldogs back in Season 79.

Even Laure herself noticed, "Ano ba to, flashback ba 'to?" she said.

The UST young gun could only attribute her and her sister's determination to the guidance they received from their father and former PBA player Eddie Laure.

Drawing strength from the Espana faithful

Apart from her sister and father, Laure was able to play through her injury thanks to the scores of UST supporters present in the arena on Wednesday.

Laure hopes to recover quickly and return to top form when the Golden Tigresses battle it out with Ateneo in a winner-take-all match on Saturday.