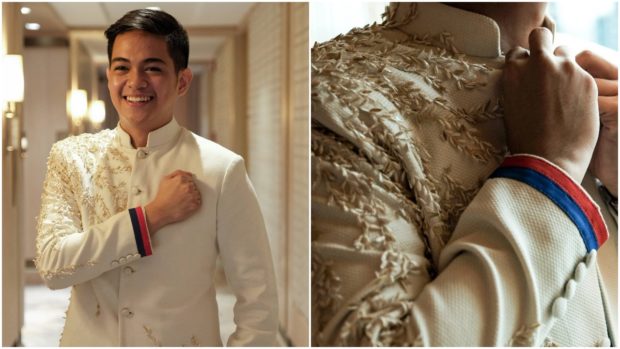 MANILA, Philippines — While most Kapamilya actors turned heads and walked down the red carpet with their glamorous gowns and suits, Francis Magundayao took the ABS-CBN Ball 2019 a notch higher as he wore a palay-inspired barong tagalog in an effort to raise awareness on the plight of the Filipino rice farmers.

In a Facebook post, Magundayao said Filipino rice farmers have “long been oppressed by big capitalist powers”, adding that it is the duty of Filipinos to raise awareness on their struggles.

“When I was told of this year’s theme, the first thing I thought about was our farmers,” the actor said in a Facebook post.

Magundayao also said that the suit, couture by Fashion designer Paolo Baltazar, pays homage to the “hard work” of the farmers in its design of the details found in grains of rice.

The actor added that Baltazar embellished the piece with real palay for a truly eye-popping, 3D effect, accompanied by the colors of the national flag on the right arm.

“For most of my life, I have been part of a large artist collective, and with it, I have realized that part of being an artist is to tell the truth. This is the truth. In light of Ms. Gina Lopez’s legacy I was also inspired to share my own advocacy,” he shared.

Majority of the country’s rice farmers continue to suffer from the effects of the low 35-percent tariff under the rice tariffication law, including a consistent decline in palay prices to as low as P7 to P10. /je