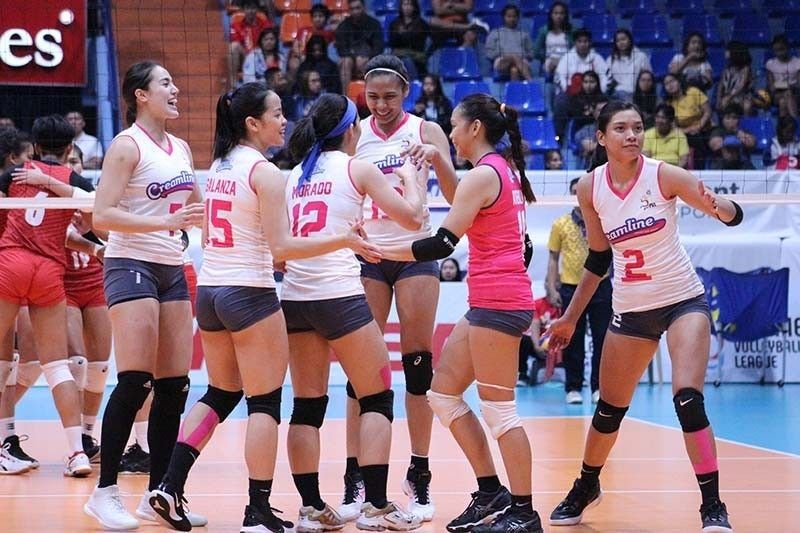 MANILA, Philippines — Fancied Creamline seeks to formalize its stint in the Premier Volleyball League Open Conference semifinals in faraway Iloilo Saturday as it faces a sister team trying to sustain its own late Final Four drive at the University of San Agustin gym.

Iloilo City has been a regular stop of the PVL with another sellout crowd expected when the Cool Smashers stake their unbeaten 11-0 slate against the surging Flying Titans at 4 p.m. of another explosive out-of-town twinbill in the season-ending conference of the league organized by Sports Vision.

PetroGazz, which stunned Creamline to capture the Reinforced Conference crown early in the season, also puts its remarkable seven-game run on the line against PacificTown Army at 2 p.m.

Though the star-studded Cool Smashers are tipped to repeat their four-set triumph over the Flying Titans last August 31, the latter have shown tremendous improvement and promise after snapping a long skid with a scrambling five-set escape over Chef’s Classics then beating BaliPure, BanKo-Perlas, PacificTown Army and Motolite to bounce back into semis contention.

They remain outside of the Magic Four with a 6-6 card but their recent surge has bolstered their chances to grab at least a playoff for the last semis slot with Motolite and BanKo-Perlas just ahead at joint third with 7-5 slates and PacificTown Army at fifth with a 6-5 mark. PetroGazz is a cinch to clinch the second semis seat with an 8-2 mark.

Focus will also be on the Angels-Lady Troopers clash with the former, bannered by Jonah Sabete, Jeanette Panaga, Paneng Mercado, Jovielyn Prado and Cai Baloaloa, out to duplicate their straight-set romp over the latter last August 28.

But the veteran-laden Army side is also itching to rebound from a sorry five-set setback to Choco Mucho the last time out with Royse Tubino, Jovelyn Gonzaga, MJ Balse-Pabayo, Nene Bautista, Luth Malaluan and Jem Gutierrez expected to lead the charge and firm up their own semis bid.

Meanwhile, Creamline and PetroGazz also brace for a fiery clash next Sunday when they meet again in Bacolod with PacificTown and BanKo-Perlas providing the appetizer in what promises to be another thriller of a twinbill in the league backed by Mikasa, Asics and KFC.