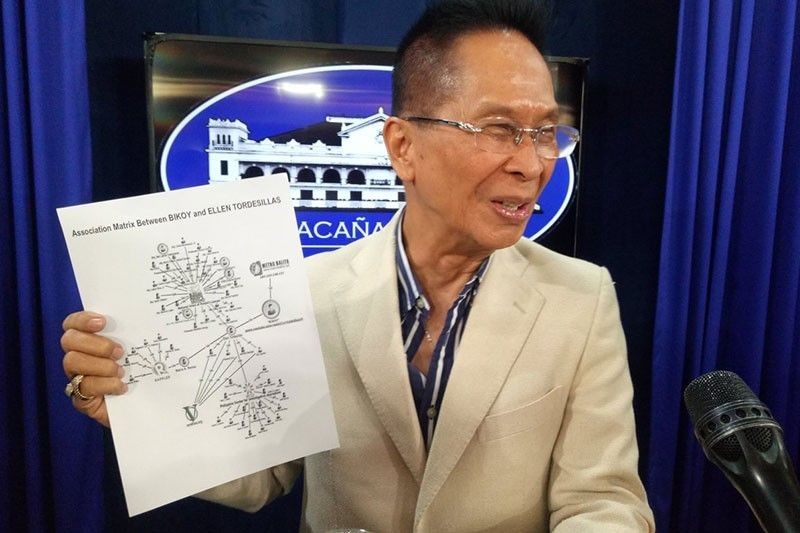 It looks like the much vaunted war on prohibited and dangerous drugs which Duterte launched right after he assumed office is turning out to be a farce and getting murkier. And this is mainly due to the latest developments in said “war” particularly the online “Bikoy” videos where a hooded man first appeared and later came out and identified himself as Peter Joenel Advincula, the supposed “Bikoy” and a self confessed former member of a drug syndicate. The video allegedly contains the “Ang Totoong Narcolist”  where Bikoy accused Duterte’s son Paolo , his son-in-law Manases Carpio and Presidential Assistant Bong Go of being involved in the illegal drug trade.

Said videos were posted on a website that was traced to have been set-up by a certain Rodel Jayme. Because of setting up said website, Jayme was nabbed by the National Bureau of Investigation (NBI) and subsequently charged by the Department of Justice (DOJ) with the crime of inciting to sedition. So the controversy revolves around the validity of this charge. Is he really liable for “inciting to sedition”?

Pursuant to Article 42 of the Revised Penal Code, inciting to sedition is committed by “any person who, without taking any direct part in the crime of sedition, should incite others to the accomplishment of any of the acts which constitute sedition, by means of speeches, proclamations, writings, emblems, cartoons, banners, or other representations tending to the same end, or…. who shall utter seditious words or speeches, write, publish or circulate scurrilous libels against the Government, or any of the duly constituted authorities thereof, or which tend to disturb or obstruct any lawful officer in executing the functions of his office, or which tend to instigate others to cabal and meet together for unlawful purposes, or which suggest or incite rebellious conspiracies or riots, or which lead or tend to stir up the people against the lawful authorities, or disturb the peace of the community, the safety and order of the Government, or who shall knowingly conceal such evil practices.”

On the other hand, under Article 139, Sedition is committed by persons who rise publicly and tumultuously in order to attain by force, intimidation, or by other means outside of legal methods any of the purposes enumerated therein. A reading of those objects clearly and definitely shows that Sedition is directed against the existence of the State, the authority of the government and the general public tranquility. Thus it is quite clear that seditious acts refer to acts against the State or government. The acts against the person or property of any public official that may be classified as seditious also refer to those that may undermine the existence of the State or Government. In the Bikoy videos posted on a website, the acts refer to the members of the family of Duterte who are allegedly involved in the illegal drug trade. Clearly they are not directed against the government or the State. It is personal and not political (People vs. Graciano Cabrera, 43 Phil, 64).

What makes matters worse is that Malacanang did not meet the issue raised by “Bikoy” head on. Instead it came out three times with a matrix accusing some lawyers and journalists and even the opposition, of plotting to oust Duterte allegedly because they were instrumental in publicizing the “Bikoy” videos. This strategy will not determine the truth about the  “Bikoy” videos. The parties involve should just file in court the proper charges contained in the videos and the matrix so that the issues will be authoritatively resolved. It cannot be done by resorting to trial by publicity.

To avoid further muddling the issues, charges should be filed immediately. The Integrated Bar of the Philippines should not have outrightly denied providing legal assistance to “Bikoy”. In fact IBP also offers free legal assistance. So it should first determine whether there is probable cause to file charges based on the Bikoy videos and let the court of justice rule on whether the charges are true or not. Unfortunately in this case it has already ruled that Bikoy is not telling the truth which could only be determined at a full blown trial.

On the other hand, Duterte should have likewise pursued the case against the lawyers and journalists and other members of the political opposition who are supposedly trying to oust him as set forth in the matrix. Interestingly, the source of this matrix has not been clearly identified and firmly established up to now. The first one allegedly came from Malacañang itself. But this was later on denied by Malacanang. Spokesman Panelo just came out with another matrix. Then later on another matrix was published even implicating Rio Olympics Silver Medalist Hidilyn Diaz as involved in the oust Duterte plot despite the fact that she is busy preparing for the Tokyo Olympics. Then Duterte himself recently came out with a statement the Matrix No. 3 was gathered by foreign intelligence group which he did not identify. And worst of all is that he likewise announced that he will not file any charges based on this latest matrix.

Due to these developments, the truth will never come out and obviously, this is due to the non-filing of the proper charges. People are still kept in the dark and have once arrived at a conclusion that Duterte and his family might be hiding something that will severely damage their reputation. Hopefully, the parties involve will still change their mind and file the appropriate charges aside from the inciting to sedition against the man behind the website, which may not prosper at all.