EDITORIAL – A break from the battle 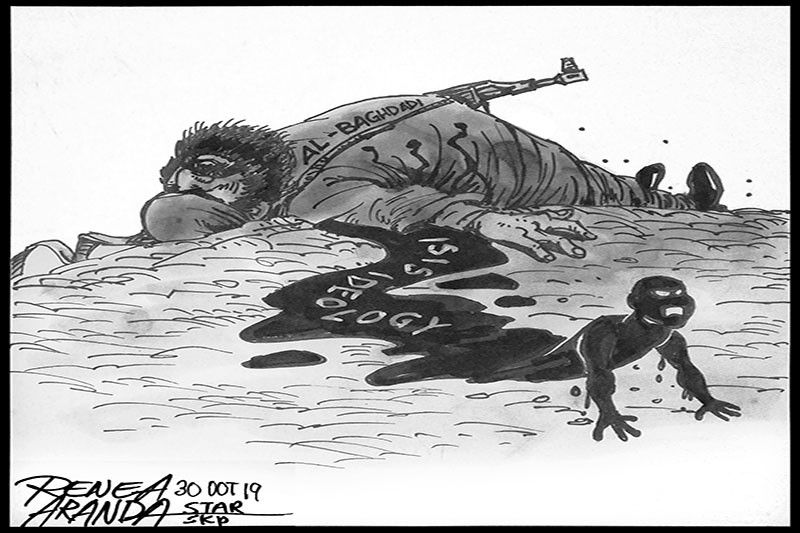 The emerging details of the kill show an operation that was as dramatic as the neutralization of al-Qaeda chieftain Osama bin Laden. According to reports, Islamic State leader Abu Bakr al-Baghdadi had a horrific death, blowing himself up using a suicide vest together with his three children after they were cornered by K9 dogs and pursuing American forces.

The world heaved a sigh of relief on confirmation of Baghdadi’s death in northwestern Syria over the weekend. As in the death of Bin Laden, however, the killing of Baghdadi will not spell the end of the extremism that he espoused. The Islamic State has been notorious for its brutal methods of advancing its twisted agenda. IS operatives are also notable for their technological savvy, which they have used for recruitment worldwide and for spreading their propaganda.

IS influence has even reached the Philippines. Maute militants professing allegiance to IS laid siege to Marawi for five months in 2017. The group picked a Filipino, the Abu Sayyaf’s Isnilon Hapilon, to serve as its “emir” for Southeast Asia. Hapilon was killed together with the Maute brothers as government forces liberated Marawi.

A campaign launched by international forces drove out IS from its original strongholds in Syria and Iraq and kept the militants on the run. Baghdadi’s death has crippled the terrorist group. The past years, however, have shown that the extremist threat mutates, with new leaders constantly emerging.

Baghdadi’s death will provide a respite from the fight, but the world cannot afford to let down its guard, even as governments move to address the causes of discontent that feed extremism. The terrorist Hydra grows new heads. When it does, the world should be ready for yet another battle.

Back on the street

Chelsea into 3rd place in EPL, Arsenal held by Leicester

Johnny Depp admits giving marijuana to daughter when she was 13